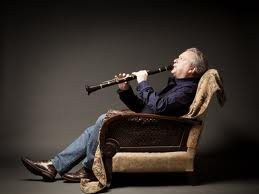 CITY OF LONDON SINFONIA
M&G Concert at the Civic Theatre
03.11.13

The first of this season's Civic Concerts welcomed back the City of London Sinfonia, in a timely celebration of British music, with a special focus on Benjamin Britten, whose centenary we celebrate this month.
Their principal conductor, Michael Collins, premièred Britten's Clarinet Concerto [realised by Colin Matthews] some sixteen years ago, and it was a real privilege to hear him play the mysterious elegiac slow movement in a new arrangement for small string orchestra by Joseph Phibbs.
The evening began with Britten's arrangement of a Purcell Chacony, and ended with a dramatic interpretation of the Serenade for Tenor, Horn and Strings from the Scots tenor Thomas Walker and horn player Stephen Stirling.
Collins played the piece with which he won the BBC Young Musician Competition back in '78, the Finzi Concerto: a lyrical reading of the clarinet part, contrasted with some forceful string playing.
The Sinfonia, led by David Juritz, were on sparkling form – I don't think I've ever heard the Holst St Paul's Suite played with such verve and evident enjoyment, from the muscular jig to the folk fiddle freedom of the Dargason finale.