JOSEPH AND THE AMAZING TECHNICOLOR DREAMCOAT 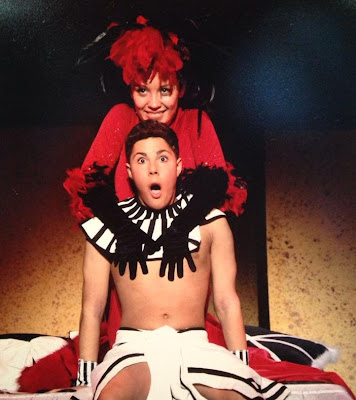 JOSEPH AND THE AMAZING TECHNICOLOR DREAMCOAT
CYGAMS at the Civic Theatre
13.11.13

Young Gen have been dying to do Joseph for years, and now their dream has come true, with a fresh young cast selling out their five-show run at the Civic Theatre.
It's an indestructible show, and over the years [I'm the same age as Lord Lloyd-Webber] I've enjoyed seeing the show grow from a simple cantata to the big bold spectacular it is today, happily discovering each new number as it was added to the score: the cowboys, the café, the calypso.
They're all there in this version of course, together with some impressive extended dance routines.
The cast includes dozens of youngsters, and some of the youngest are the chorus whom we meet first as schoolkids exploring Egypt with their pretty young teacher [Kathryn Peacock], who has a rainbow rucksack, and a dream of her own …
They're there, in nightwear, clutching candles, with Joseph in his cell, they get to reprise Any Dream, and they're back again, in coloured teeshirts, for the happy ending.
Jeremy Tustin's production is full of inventive touches: the coloured banners, Potiphar [James Bantock] and his toffs, plus the predatory Mrs P [Eve French], the Benjamin limbo for the Calypso, the flower-power psychedelic Act One finale, the vast coat of many colours as a final flourish. The French scene, and the cod Calypso, both excellently done; only One More Angel seems lacking in pastiche style, making the energetic hoe-down less effective than it might be.
Very much an ensemble show, with the brothers [and their womenfolk] working well together in the big numbers. But I was particularly impressed with Jack Toland's Simeon in Canaan Days, and with Jayden Booroff's Joseph – a warm stage presence and superbly realised renditions of the two keynote numbers. [MD Bryan Cass.]
A real treat to see Young Gen bring their trademark enthusiasm and discipline to this iconic show at last. Their unflagging Duracell energy is sustained right through the megamix finale, when, on opening night, the packed auditorium rose in tribute to the brothers, wives, dancers, choir, King, camel and ensemble packed onto the monumental ancient Egyptian set.
on Thursday, November 14, 2013