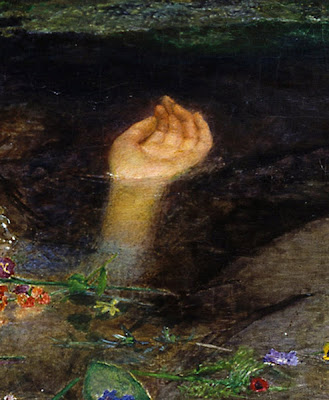 Is Hamlet our hero ? What, like Henry V ? Or more like Macbeth ?
Lynne and Mick Foster's uncluttered, dynamic production for Chelmsford Theatre Workshop encourages us to re-evaluate our take on the Prince of Denmark, though prior knowledge of the play, or the vast body of criticism it has attracted, is certainly not essential.
A clean, monochrome set, its three doors echoing the Renaissance stage which first saw this tragedy acted, some super costumes, and a clutch of fine Shakespearean performances make for a satisfying evening with the Bard.
Barry Taylor is the eponymous hero [or not]. A bearded , brooding figure, he has certainly “lost all [his] mirth”. He speaks the speeches with a natural, spontaneous delivery which still respects the verse. The soliloquies, very much an innovation back in 1601, are done in the round, drawing us in to Hamlet's troubled mind. This is an aggressive, angry man, unfeeling towards others, notably his mother [Beth Crozier, in a strong performance] and poor Ophelia, especially in a finely judged “nunnery” scene.
She is played, with stylish subtlety, by Sarah Bell. She has a bawdy song, an impressive mad scene. She's listening, a smile playing on her lips, to Polonius's interminable advice to Laertes [Robin Mahr, physically and vocally secure], and she's lurking, with her prayer book, throughout To Be Or Not To Be.
In a generally strong supporting company, promising first CTW outings for Tom Ford as Rosencrantz, Simon Burrell as a smooth-talking Claudius, and Christian Search as an elegant Horatio.
Jim Crozier is the angry Hamlet Senior; Robin Winder the phlegmatic, loquacious gravedigger.
The acting area, though it must have been very difficult to light, is effectively used, with many striking stage pictures: the grouping of the players, with R & G, just one example.
Not a definitive Hamlet – how could it be – and the first and last lines are amongst the many cuts. But a thoughtful interpretation, thankfully free of gimmicks and director's ego.

A considered character exploration opens the CTW programme, written by co-directors Lynne and Mick Foster, analysing Hamlet's place as a literary "hero". Should we be taken in by his intelligent and profound speeches, or see past them to the terrible actions we witness him perform? An interesting take, and one that cleverly opens the way for thought-provoking direction to engage those with prior experience of this epic work, but does not clutter or confuse the story for those approaching the play for the first time.
Barry Taylor's young Prince Hamlet is given a melancholy characterisation, exploring the directors' interpretation with a particularly nasty portrayal, especially in his chilling treatment of both Ophelia and Gertrude. In a supporting ensemble cast of mixed experience there are some standout performances. Beth Crozier gives a compellingly regal interpretation of Gertrude with particularly impassioned reactions to Ophelia's tragic demise. Her new husband Claudius is played by Simon Burrell with conviction and although his posture could be more majestic his delivery is clear and engaging. Sarah Bell's Ophelia is very gentle, quietly done her descent is all the more intense for its calmness and a pin can be heard drop during her singing scene. A strong couple of cameos too by Jim Crozier as the ghostly old Hamlet, and Robin Winder as the garrulous gravedigger.
A fluent and accessible version performed smoothly with moments of quiet intensity. The hand of the directors can be felt throughout, generating interest for audiences both familiar and new to one of Shakespeare's most famous and influential plays.
a fuller version is posted on her blog ...
on Thursday, November 07, 2013

One of my most interesting to research university essays was on the subject of Why Does Hamlet Delay? I am also pretty familiar with many differing approaches to Shakespearian productions ranging from Bogdanovich and his motorcycles to a female Hamlet who was pretty darn good, and Alex Jennings's hilariously comic gloomy Dane. It's my opinion that Shakespeare's writing is so strong and powerful it can withstand just about anything anyone chooses to do to his work.
So my theatrical sleeves were rolled up ready for Lynne and Mick Foster's somewhat unusual approach to and drastic cutting of this classic. Claudius as the hero? Bring it on.
Simon Burrell gave a very strong and energetic performance as the usurper/murderer/brother and husband. Barry Taylor was in thoughtful mood as Hamlet himself while Jim Crozier gave a very unfamiliar take on the Ghost of King Hamlet roaring and raging at events.
Beth Crozier was a mature, womanly Gertrude with David Johnson as the pedantic Polonius.
There were two stumbling blocks for me. The first was that while intellectually enjoying the new take on events I missed the opening scene on the battlements which really starts things off and I mourned the lack of an Osric. It's a delightful role in which Alec Guinness made his London stage debut.
The second was that, because I was listening very carefully to the words, for me they kept leading back to Shakespeare's original portrait of a psychologically disturbed young man voicing his thoughts based on events that have led to his current state of mind.
I'm glad I saw the production, simply unconvinced by the change of emphasis.