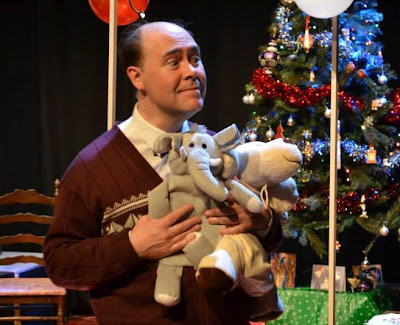 Mary Redman was in the audience:

Most of Alan Ayckbourn's plays are a gold mine of opportunities for actors and directors and this black comedy view of a "family" Christmas is no exception. All the stresses and strains of people who don't see each other from one year's end to the next, the catering dilemmas, who should be kept well away from alcohol or in this case, guns.
Designer Alan Thorley came up with an impressive set with its floor plan of two living rooms and a hall with a staircase leading off one side and a kitchen on the other, plus massive Christmas tree.
Entertaining as it was this, however, led to one of the problems of this particular production - the physical distance of the audience from dialogue and action (of which there was plenty) in the hall area.
There were plenty of laughs. Especially from William Wells's enraged and outraged Howard's showpiece puppet theatre, Vernon Keeble-Watson's thoroughly nasty piece of work Uncle Harvey and Kathy Smith's outrageously drunken Phyllis. With them you knew the production was in safe hands.
The production was, however, in footballing terms a game of two halves. Some of the cast didn't realise that their distance from us at the back of the set needed more voice projection and energy so that even the front row missed lines. This contrasted with the maturer members of the cast giving it their all in voice and characterisation, and the contrast was obvious.
Gary Ball gave a nicely understated portrait of the writer guest Clive. His delicate tiptoeing scene with Amy Clayton's frustrated spinster was followed by a comic sex scene with her married sister Vikki Pead's Belinda.
Marjorie Dunn was the director.
on Sunday, November 24, 2013