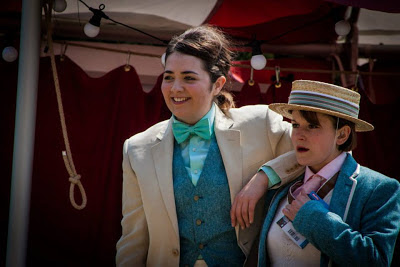 THE TAMING OF THE SHREW
Shakespeare's Globe on Tour
11.06.13

Their grubby red and white fairground booth is pitched back home in the Globe this week, after opening in Portsmouth, and before going on to Bungay, Bury St Edmunds and the Bodleian, amongst many other British venues, not to mention international dates in Malta, Austria and the Far East.
This is a predominantly young company, enjoying the doubling and the disguises. Watching them reminds us of what Shakespeare's "little eyasses" must have been like, the boy companies who were so popular with the play-going public.
Christopher Sly, the drunkard who is duped in the Induction, is a cocky Geordie Kate Lamb, later Katerina, more than a match for Leah Whitaker's swaggering Petruchio – "I am rough and woo not like a babe," she assures us with a knowing look and a bone-crushing handshake. Kate is almost eager for their first kiss, but her submissive speech in the closing moments cleverly wrongfoots Petruchio, who is clearly embarrassed by her effusive abasement.
Excellent comic support from the company, including Remy Beasley as Tranio and Becci Gemmell as Lucentio [pictured], Joy Richardson as the Widow and an asthmatic, cricketing Gremio, Olivia Morgan as the two blondes [Biondello and Bianca], Nicola Sangster as Hortensio and Kathryn Hunt as, amongst others, a lovely Yorkshire Baptista.
Joe Murphy's production has many moments to relish, Kate being left at the church for one, and Colin Buckeridge's music is well used [these are multi-talented actor/musicians], though like the costumes – hunting pink, concert-party flannels, seventies wedding suit – it lacks a cohesive style.
It's a decade since the last all-female Shrew at the Globe, but only last year that Toby Frow's production was the hit of the season. Best if you can put those two out of your mind, and imagine this fresh and feisty show on a warm evening outdoors, with strawberries in your hamper to match those on stage …
on Thursday, June 13, 2013

Hi there, I'm about to submit my MA thesis on all female Shakespeare and was wondering whether I might print this photograph in my final piece? All credits will be given. Please do let me know! Anna