LIGHT UP THE STAGE 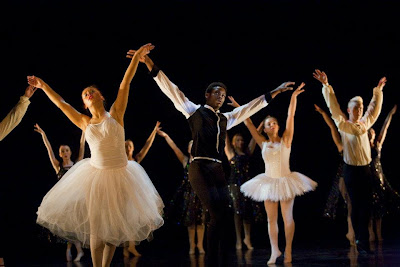 LIGHT UP THE STAGE
Horizons and Interactions Dance Companies at the Queen's Theatre, Hornchurch
24.06.13

An amazingly impressive showcase of song and [mostly] dance from these talented, confident young performers.
Two dozen numbers, constantly surprising and delighting the vociferously appreciative audience at the Queen's.
The ensemble burst onto the stage, in sparkly scarlet and black, for Swing City, a jazzy, jivey display of boundless energy, choreographed by Sandra Broxton. Elaine O'Connor was responsible for the classical Can You/Will You Stay, danced by two couples, a lovely piece to Ella's Black Coffee, with a beautifully judged ending, and an outstanding solo for Aston Joshua to end the first half.
Jess O'Shea's The Pride Boys was a potent blend of Street Dance and Lion King, while Sarah Woodroof's Speak Easy began with traditional charleston tap routines before developing into something much darker and edgier. The same choreographer's K.O. was an incredibly inventive, highly original take on tap – two American boxers in the ring, spurred on by their armies of fans. Still can't quite believe how good this was … Joshua in one corner, Lee Howard in the other. There was Romantic ballet [Emeralds] Chorus Line [One] and Martha Graham [Arc of Light] and to finish, a stage full of painted faces for the Celebration finale.
Vocally, we heard an accomplished beat-box chorale – Mash-Up – and several confident soloists.
Havering College must be very proud of its students – this spectacular show was a superb example of work which managed to be both disciplined and spontaneous: two hours of pure pleasure.

Email ThisBlogThis!Share to TwitterShare to FacebookShare to Pinterest
Labels: havering college, LIGHT UP THE STAGE