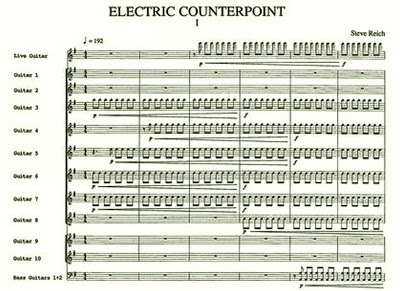 Plenty of pleasant surprises in the summer concert this year – and not just the green fiddle amongst the second violins.
Iain Buchanan played his A-level practical work – Electric Counterpoint, a 1987 piece by the father of minimalism, Steve Reich. Very impressively executed, it involves a multi-tracked backing [all twelve tracks laid down by Iain] and live electric guitar. No less impressive was the other solo, a Brahms clarinet sonata from David Wringe with William Foster playing the demanding piano accompaniment – a very polished performance with eloquent pianissimo passages.
David brought his bass clarinet to the ever-popular Wind Band, which this time out played an energetic Slumdog Millionaire and a smooth Come Fly With Me, with fine work from the two trombonists amongst others. They ended with a tribute to Whitney Houston in an arrangement by Michael Brown.
Tuneful light music from the Junior String Ensemble, [eleven players plus piano] including a lovely Pennies From Heaven with an authentically Thirties piano intro.
The Junior Orchestra, led by Jonathan Belay, brought us Haydn's Surprise and Mozart's French nursery rhyme, featuring col legno and pizzicato among the variations.
Vocally, the trebles sang a very pleasing arrangement of Sting's Fields of Gold, as well as Pure Imagination, written for the 1971 Chocolate Factory film, and revived in the new West End musical which opened this week.
The Year 7 Singers, a sizeable proportion of the year group, filled the stage for a confident performance, with a splendidly open continental sound, of Vois Sur Ton Chemin, from the 1984 film Les Choristes.
The vocal ensembles, and the Junior Strings, were directed by Rebecca Chant; the Orchestra and the Wind Band by Director of Music Tim Worrall.