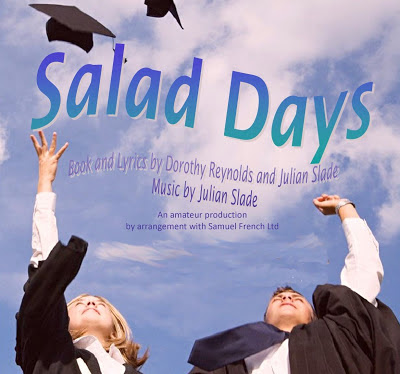 Julian Slade's cosy little piece is a late-flowering British musical, a final taste of innocence before those rude boys Newley and Bart changed things for ever.
Rarely performed, recently revived in town, it is a charming reminder of those far-off days when "gay" meant "merry", flying saucers were new technology, and musical comedies were done without head mics. It has a creaky, dated plot, but a string of tuneful, catchy numbers.
Stephen Kenna's production for Braintree [who last staged it in 1979] has many strengths, not least the presence of the cast [graduating students, nightclub revellers] mingling with the audience.
Credible Oxbridge graduates from juvenile leads Tom Willis [Timothy] and Emma Loring [Jane] – he has a natural feel for the genre, singing, dancing, smiling, and she has a lovely voice, giving us a beautiful Sit In The Sun and a touching duet – We Said We Wouldn't Look Back.
Plenty of opportunity for character work, grasped with particular felicity by Andy Bryant as Uncle Zed and others, Michelle Jesse as the chanteuse Asphynxia, Anthea Kenna as Lady Raeburn, and Alex Bass as moustachioed civil servant Fosdyke and hooray henry Nigel, an amusingly believable peer, at least from the waist up, well matched by his ditsy Fiona [Claire Addis] …
Good ensemble work, too, in the involuntary dancing, and the breakfast trio. Elsewhere, some scenes overstay their welcome, even when they are as well done as the Beauty Parlour monologue.
The stage, made deeper by a generous apron, is well used in the big production numbers [Claire Addis the Dance Captain] with simple, adaptable scenery and a fetching little five-octave Minnie. But blacking out between almost all of the nineteen scenes does nothing to help the crew, and slows the impetus of the show.
A colourful, enjoyable revival of a charming classic, followed this autumn by a very different animal, the cult favourite Little Shop of Horrors.
on Sunday, June 09, 2013