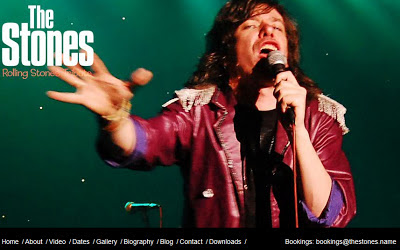 Jim Hutchon rocked down to the Civic for the Weekly News ...

Tribute band The Stones, hit the Civic last week in a blast of sound that had the rafters vibrating. While not exactly in the scale of the Rolling Stones extravagant gigs in world venues, this group is no tongue-in-cheek pastiche. They take the music seriously and were well appreciated by the audience of a certain age.

The lead, Ben, bears an extraordinary resemblance to Jagger, though not just there for his looks. The boy can sing, and mimic the full outrageously camp pouting and strutting backed up by the group Richard, Jason, Steve (a spitting image of Bill Wyman), Charlie, and the man who put the group together in 2007, JBlack.

All the old favourites were there, reproduced exactly as they were first staged in the 60s and 70s, including ‘No Satisfaction’, ‘I Wanna be Your Man’, ‘This’ll be the Last Time’ and in a fantastic finale, a spirited rendition of ‘Jumping Jack Flash’.

Although there were comparative youngsters in the audience, who jigged self-consciously at the front of the stage, for most of the audience, there were few signs of the hysteria of bygone years, and the audience seemed more prepared to contemplate past excesses in quiet enjoyment.
on Monday, June 10, 2013