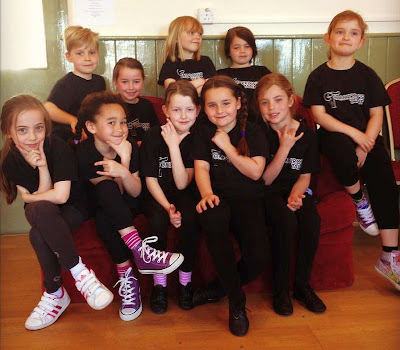 An arresting start in scarlet and black, Gangnam Style, for this year's revue, followed by denim and white for Car Wash, which featured a clever human chassis. And a rich mix of footwear, including flippers and some sparkly sneakers, for New Shoes. The youngsters are accompanied by pied pipers from the teaching team, in a seamless, polished sequence of song and dance.
There's disciplined choral singing, too, in Beauty and the Beast and When I Grow Up, from Matilda, which also furnished Revolting Children – the finale.
A generous helping of Wonka's chocolate gives the five golden ticket winners a chance to shine, with nice monologues from Violet and Charlie. A neat ensemble production line, and, from the younger students, lively green-wigged Oompah-Loompahs.
As Tomorrow's Talent prepares for its tenth year, the future looks as busy and successful as ever. Their Glee Club Team – Figure of Eight – who contributed two accomplished guest spots to the show – will be hoping to do even better in next year's CBBC finals. And next month in the Civic, an 80-strong cast will perform Miss Saigon – its Essex amateur première – and we heard a brief Bui Doi as a teaser.
on Sunday, June 16, 2013