A BIT OF A HITCH 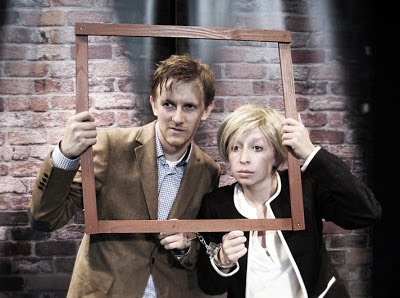 A BIT OF A HITCH
EnglishTheatre Company at Brentwood Theatre
24.06.13

Mild-mannered history teacher David Jones – gauche and not a little naïve – is drawn into a mysterious world of murder and espionage, with lines, images and music all drawn from the iconic oeuvre of Alfred Joseph Hitchcock.
If you've seen Patrick Barlow's 39 Steps spoof, you'll get the B-picture, though ETC's take, written and directed by Michael Harry, is more surreal, a little edgier, and even shorter at less than 90 minutes including the interval.
Nick Potts is David – The Man Who Knew Too Much, singing Que Sera down the telephone to his confused mother – and all the other characters are played by Joshua Tobias Mills and Amy Berry. She is various femmes fatales, most of them with Tippi Hedren hair, and all beginning with C. He gets the villains, including the Boss in a plum-coloured jacket, and the grey-haired denizen of a certain motel, anagrammed Fawlty-Towers style as O Let Me Stab.
Against a featureless brick wall, the location shifts from the H&M Club to the Scotland train to the Royal Albert Hall. One nice touch is the use of placards and puppets above the parapet. Not just mannequins, but The Birds and the crop-sprayer [a lovely model, this] from North by North-West. There's a clever mimed recap, too, against sound effects – which will presumably get slicker and swifter as the show beds in.
Virtuosic accents, quirky walks, audience participation, all conspire to make a cheekily entertaining piece.
A Bit Of A Hitch, and its companion, Waiting On Shakespeare, are moving in to The Courtyard Theatre in Hoxton for the month of July.

Email ThisBlogThis!Share to TwitterShare to FacebookShare to Pinterest
Labels: A BIT OF A HITCH. english theatre company, brentwood theatre