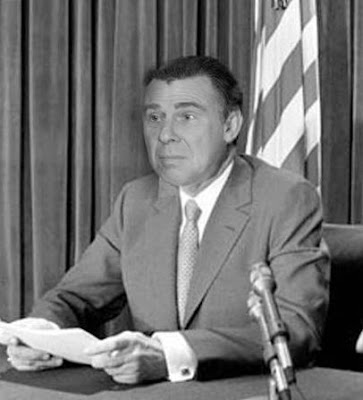 A quick PowerPoint revision of the Watergate affair, and then we're into the build-up to the turning point in the careers of these two very different men – as Tricky Dicky points out, only one of them will be able to stay in the limelight …
This is not Spitting Image – Kevin Stemp has more of a Reagan look about him, Dean Hempstead reminds me of Paul Gambaccini. But the confrontation is the important thing in Peter Morgan's play, and the details surrounding it – the idle chat before the cameras roll, the hidden handkerchief, rehearsing the questions.
The advisers watching, helpless, then exultant, and the superbly done eve-of-battle phone call. Stemp and Hempstead are ably supported by some excellent actors - most impressively, Chris Green and Peter Spelling as Reston and Zelnick.
But it is Stemp's authoritative and believable incarnation of Mr President that is the high point for me – a compelling and masterly performance.

Frost/Nixon runs at the Old Court through till Saturday 29.

Jim Hutchon was in the first night audience for the Chelmsford Weekly News:

Staging a play about a television interview is a challenge as the lack of material leaves very little room for manoeuvre. Mark Preston’s version worked the details to advantage – Nixon’s famous Life front page had the actor’s face photoshopped in, and clear attention to detail in the meticulous preparations for the interviews.

Kevin Stemp put on a marvellous bravura performance as the slippery Nixon, blustering - statesman - cowed, and ultimately worn down by the relentless probing of Frost. Dean Hempstead’s Frost didn’t entirely inhabit his suave, quick-witted character – not helped by a script which placed him unhelpfully as the puppet of producer John Birt (Martin Robinson) and his henchmen Jim Reston Jr (a compelling Chris Green) and Bob Zelnick (Peter Spilling).

Leaden-footed at first, the action took on variation as the night wore on. Powerful arguments were wholly absorbing, and provided the main dramatic elements. As an analogy to a prize fight, there were lovely atmospheric moments when the lights narrowed, the bustle of the ‘seconds’ stilled and the contenders got down to slugging it out.

This a CTW ‘must-see’ play, it is sharp, clever and sure-footed and will go down as a milestone in the group’s long and distinguished history.
on Tuesday, June 25, 2013