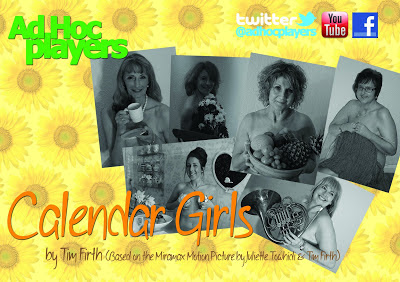 Tai Chi to the the tune of Jerusalem is only the start of it. Tim Firth's funny, feel-good play follows six plucky members of the W.I. as they plan, pose, and then market their alternative calendar.
Wendi Sheard's production for Ad Hoc stresses the ordinariness of these nervous but determined women, contrasted with the snootiness of their out-of-touch chairperson [Lisa Mathews].
Good sustained character work from Sharon Sims as Cora, church organist and single mum, with her Beatles T-shirt and down-to-earth emotions. And from Chloe Lewis-Brooks as the desperate golf widow who dresses like a tart, drinks like a fish and needs bigger buns …
Annie, whose husband [Paul Ganney] dies from leukaemia, sparking off the whole settee scheme, is played with sincerity by Shealagh Dennis – they share a lovely tender moment over the sunflower seeds. Her friend of 400 years, Miss October, is Pam Shrimpton, who makes a rousing speech to Council before being dazzled by the television lights and the lure of fame. Jessie, retired schoolmistress, [Debbie Shears] speaks tellingly of growing old, and even reticent Ruth [Susie Purkiss] finds the strength to see off her beautician love rival.
The sunflowers planted in May bloom, in back projection, in late summer, and al fresco Tai Chi is followed by portions of chips.


A sell-out success for Ad Hoc, and an entertaining way of raising funds for the original Calendar Girls charity, Leukaemia and LymphomaResearch.


Tim Firth's play of 2008 – and the calendar of 2000 – have returned to their charitable, community roots, with over 500 amateur groups fighting for a chance to perform it, raising money for Leukaemia and Lymphoma Research and aiming for the Guinness Book of Records.
Ad Hoc packed the Brentwood Theatre for their version, directed by Wendi Sheard. The set combined Village Hall and a hill in the Yorkshire Dales, and the large cast clearly enjoyed telling the now familiar story of the W.I. women who bared all to buy a settee for their local cancer ward.
None more than the giggly school-friends [Shealagh Dennis and Pam Shrimpton] who between them set up the fundraising scheme and see it through to fruition. Chloe Lewis-Brooks made a lovely loud lush, bane of the Golf Club, and Sharon Sims lit up the stage with her brassy Cora.
Each of the ladies has a back-story, some hilarious lines, and carefully crafted speeches. A snappier pace, better projection and a more confident approach would have made the evening more enjoyable. And the crucial photo-shoot, while ingenious, struggled to convince, with no tripod, flash and desperately deployed reflectors. Clever use of props, though – knitting for schoolmistress Jessie [Debbie Shears], conserves for Ruth [Susie Purkiss] and barely adequate buns for Celia …
In addition to a percentage of the ticket price, there was an enterprising calendar, featuring tasteful shots of these plucky calendar girls in all their glory.