A GAME OF GOLF 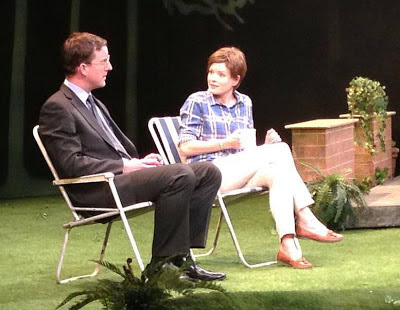 A GAME OF GOLF
at the Mercury Theatre, Colchester
012.06.13
for The Public Reviews

Like A One Man Protest back in April, this set of variations revolves around Miles, the beautifully observed character whose friendship with Toby is at the heart of this play.

He is Chair of Governors at Toby's school. Married to promiscuous Rowena, but secretly in love with Celia, Toby's wife.

Ayckbourn's genius allows him to play games with structure and storylines whilst still drawing lifelike portraits of people we know, and exploring their lives and loves, their failings and their foibles.

Directed by Robin Herford, the actor who first created Toby, Miles, Lionel, Joe and Reg thirty years ago in Scarborough and the West End, this often poignant social comedy is also a rare chance to admire the technical virtuosity of two actors who can inhabit such contrasting costumes and characters. Gwynfor Evans, especially, makes a totally believable Miles – no groundsman Lionel in this one – and an insensitive, misogynistic Toby. Ruth Gibson, this time out, gets to play Celia's unconventional middle-class mother Josephine as well as the formidable golfing Governor Irene Pridworthy. We see the forthright Rowena, whose ambition was to be a nymphomaniac, too, but this strand really belongs to Celia.

It's her decision to leave the cigarettes on the table which leads us, and them, through A Visit From A Friend, with Miles awkwardly trying to discuss Toby's inadequacies as Headmaster, to Dinner On The Patio, where the white wine flows rather too freely, absent loved ones are toasted then trashed, Stendhal is invoked as the shadows close in on the Teasdales' untidy garden. A superbly judged scene.

After the interval, the golf course: a bunker, a bit of rough. Toby and Miles making their own way to the tenth hole. Both Rowena and Celia are resentful of the time these two old friends are spending together. This crucial scene ends with Rowena's attempt to seduce her own husband [who's just had his second embarrassing outburst to a much older woman]. Should he give in and go back to his serially unfaithful wife, or reject her in favour of Toby, who seems to prefer the company of chaps these days, and the golf course ?

In this version, the final churchyard scene [Easter Greetings] is somewhat bleak, with Celia grown bitter five years on, and Miles's rocky marriage with Rowena simply transferred to Brisbane. Her friends a new set of gentlemen callers, his only real friend lying under a gravestone off stage right.

Would we have preferred A Triumph Of Friendship, where the two men set up an Odd Couple home together ? Perhaps. In this exploration of chaos theory and the role of chance in our lives, it would be interesting to explore the aleatory pathways of destiny by providing a real choice – the spin of a coin, perhaps, or even an audience show of hands each night.

But this compendium has been a constant delight, and we shall miss these flawed but very human friends and neighbours, husbands and wives. There are sixteen scenes, even a couple of minor characters, left to explore. If we can't hope for second helpings next season, then perhaps a marathon reading in the studio at some point ?

Email ThisBlogThis!Share to TwitterShare to FacebookShare to Pinterest
Labels: A GAME OF GOLF, colchester mercury, made in colchester