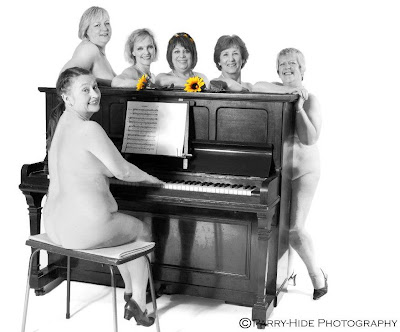 Tim Firth's play of 2008 – and the calendar of 2000 – have returned to their charitable, community roots, with over 500 amateur groups fighting for a chance to perform it, raising money for Leukaemia and Lymphoma Research and aiming for the Guinness Book of Records.
It's an inspiring story, shot through with sentimentality and Yorkshire humour. Laura Bennett's sell-out production at Writtle has a top-notch cast, not only the six poseuses, but the beautician, WI officials and guests, plus of course the men – Neil Smith hilarious as the shy snapper, Daniel Curley very moving as the husband whose death sets the whole scheme in motion.
Leafing through the months, we see some of the best, and the bravest, actresses of a certain age for miles around. Paulette Harris outstanding as the forthright florist, Michele Moody as the boozy refugee from the golf club, Barbara Llewellyn as the Brodiesque retired teacher, Sharon Goodwin, the determined widow, Beth Crozier as the musical single mum and Liz Curley as the reluctant Ruth. Not forgetting Jean Speller as the gloriously snobbish branch chairman.
They're a cheeky bunch, naughtily subverting the jam and Jerusalem image with their giggly banter. And Firth's script provides one-liners and set-pieces for everyone.
This thoroughly enjoyable staging is spare and simple – the Dales on a sliding screen – with effectively stylised solutions to the death of John, the showers of fan mail, the sunflowers.
Typically for Writtle, there are sunflowers everywhere, a fund-raising stall for that original Calendar Girls charity, Victoria Sponge [not M&S] and Knapely Knee-trembler in the interval, the real W.I. in attendance. The all-important photo-shoot props include preserves from, where else, Wilkin's.
And yes, dear reader, I bought the calendar, [pictures by ParryHide Photography] which I'm pleased to see features many other company members to make up the eighteen months ...
on Thursday, June 20, 2013