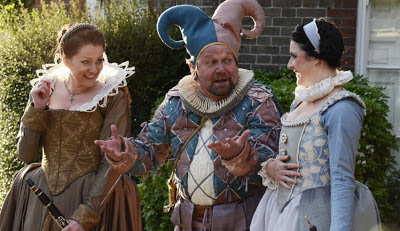 AS YOU LIKE IT
Cut to the Chase at the Queen's Theatre Hornchurch
An open air promenade performance in Langtons Gardens
05.06.2013
for The Public Reviews

Hard to imagine an evening more fitted to Shakespeare's sylvan comedy. The lightest breeze, warm sunshine, cloudless skies all evoke the Golden World.
It's 410 years since As You Like It was premièred, at another country house, and 60 since the birth of the Queen's in Hornchurch – hence the £19.53 ticket price. For the occasion, artistic Director Bob Carlton has devised a merry romp, gently pruned, the tone just right for the audience guided round the lovely gardens of Langtons House, built when Hornchurch was as rural as the Bard's Forest of Arden. The audience is encouraged to follow the action with an arm round a shoulder, a beckoning wave, a cry of Come Hither … and, since this is Cut to the Chase, the Queen's own company of actor/musicians, there is plenty of music to lure us to the next scene.
There is magic in this setting – the action begins in a circle, with snatches of song murmured by the mingling players, and ends with the audience brought into another circle for the closing dance. Time and again, simply by turning around, we are met with another scene. The Duke [Sam Pay] is discovered in the impressive Cedar of Lebanon, under which same greenwood tree the melancholy Jaques [Simon Jessop] delivers his Seven Ages, the verse, as it is throughout, clarified by mime and gesture. The warm brick façade, the holly from the song, the sheep in the bucolic meadow all play their part to perfection. And Rosalind arrives for her nuptials in a faerie skiff on Repton's serpentine lake.
Rosalind – and her alter ego Ganymede with a Ronald Coleman pencil moustache – is engagingly played by Sarah Mahony, her Orlando is Elliot Harper, just as convincing in his courtship as in his wrestling with Charles [Sam Pay again]. Very impressive fighting, particularly considering we were close enough to hold the ropes. The motley-minded Touchstone, excellently done by Matt Devitt, comes off worst in this bout, as he does in his tempestuous pursuit of his muppet Audrey ["even a toy in hand"], very amusingly overdone in the best tradition of Shakespeare's Fools. Good work too from Barbara Hockaday as the proud shepherdess Phoebe, who weds her Silvius [Niall Costigan] when her Ganymede is unmasked. Only Jaques is less than joyful at the happy ending, though in this version he does at least swap his black cap for Touchstone's jester's headgear …
Clear diction, with not a syllable lost to duck-calls or passing aircraft, and a straightforward telling of the tale, as we are led along the pathways and through the shrubbery in pursuit of the tortuous plot, played out in "this wide and universal theatre". A rare chance to enjoy a Shakespearean comedy from the inside.

Email ThisBlogThis!Share to TwitterShare to FacebookShare to Pinterest
Labels: AS YOU LIKE IT, Cut to the Chase, langtons gardens, queen's theatre Hornchurch