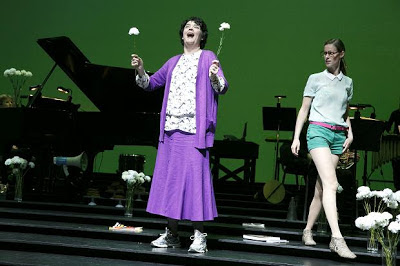 THE IMPORTANCE OF BEING EARNEST
The Royal Opera in the Linbury Theatre
17.06.13

How to make an opera out of Oscar's "trivial comedy" ?
In this, the first staged production [semi-staged, I'd have said], there are at least four strands, sometimes complementary, sometimes contradictory: the words, the music, the adaptation and the direction.
It's a sell-out run for the Linbury, and the audience is quick to laugh at the wit of the original [in anticipation, on occasion, a notorious shortcoming of surtitles]. There's wit in Gerald Barry's score, too, with Auld Lang Syne variated, German song referenced several times [Lady B approves of lieder], and nice G&S capering for a reprise of "What Can I Do?". Wilful pauses, clever punctuation, and for Cecily's duet with Gwendolen, augmented percussion including those forty notorious china plates.
Would Wilde have approved ? Probably. He may well have recognised something of himself in Alan Ewing's excellent "Aunt Augusta" – florid and pin-striped. One person who would have loved it is the Dadaist Tristan Tzara, who appears as Jack Worthing in Stoppard's Travesties. The subversive nonsense would have appealed – Lane [Simon Wilding, stalking his betters] peeling a cucumber, the food fights, Algie's red sneakers spotlit as the piece opens.
Ramin Gray has decided to set this in the present day – as if the rebarbative music were not dislocation enough – so Algie is listening to the piano on his iPod, and the Army Lists are googled on everyone's smartphone.
The actors, dressed so as almost to blend in with the audience, sit in row A when they're not on.
Character work to match the brilliance of Ewing's aunt from Hilary Summers as Prism in purple, pursued by her muscular Christian Chasuble, cycle helmet and sandals [Geoffrey Dalton].
Benedict Nelson [the Barber at ENO earlier this year] is a cool Algie, especially in his Bunbury clothes, and gives a confident interpretation of the score – for example in his Cucumber Sandwiches duet with Paul Curievici's Ernest. Plenty of musical humour from the girls, too, starting their tea-time encounter on loud-hailers: Ida Falk Winland as a shrill bespectacled Cecily, Stephanie Marshall an amorous, elegant Gwendolen.
The orchestra, sharing the black raked steps of the stage with the singers, is the superb Britten Sinfonia, under Tim Murray. As well as negotiating the tricky score, they're called on to stamp and shout out dialogue. They rise to the occasion very impressively.

debris on the stage as we go into Act III - the view from our "box" at the Linbury ...

Email ThisBlogThis!Share to TwitterShare to FacebookShare to Pinterest
Labels: linbury studio, royal opera house, the importance of being earnest