THE COMEDY OF ERRORS 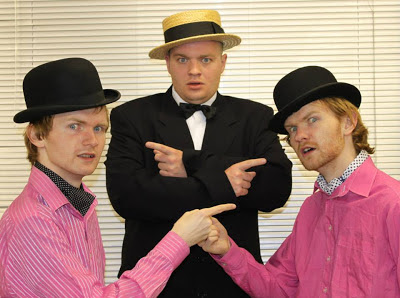 THE COMEDY OF ERRORS
Romford Summer Theatre in Raphael Park
21.06.13
for Remote Goat

Lively, unsubtle and short, Shakespeare's early farce is a good choice for the open air.
Kevin O'Connor's stylish production is set in the Roaring Twenties, with appropriate snatches of song to bridge the scenes. [Was that Jay Whidden's Louisiana as I took my seat in the Rockery ?]
A casting luxury Shakespeare must have dreamt of – the Spong brothers as the two Dromios. Their cleft-apple looks add hugely to the mirror moment at the end, the hand-clasp exit, and the ingenious scene with the two slaves either side of the "guilty doors".
Andrew and Richard had much of the physical comedy, too, well-timed and never over-played, and Dromio of Syracuse [Richard, I think] gets some of the best laughs from his riff about his kitchen-drudge "wife".
Their two twin masters, Tweedledum and Tweedledee in their boaters and Oxford bags, are Mark Griffiths and Paul Sparrowham, hilarious in his confusion, especially in the "old rope" sequence.
In fox fur, pearls and gorgeous flapper dress Natalie Sant makes an elegant, eloquent Adriana, with Lindsay Hollingsworth a nice contrast as her bookish sister.
Plenty of enjoyment to be had from the smaller roles, too: Jim Rimel telling "sad stories of his own mishap", Vernon Keeble-Watson the very model of a major-general as the Duke, Chrissie O'Connor as the devil's dam, John Lester as the wronged goldsmith, Bob Etherton as a corny stage conjurer. And Louise O'Connor is the Abbess, who engineers a happy ending as none other than Aegeon's long-lost wife, mother of the twin Antipholi.
The sylvan setting works well here; our imaginary forces can easily convince us that the Centaur, the Phoenix and the Porpentine lie just over the lake, beyond the trees …