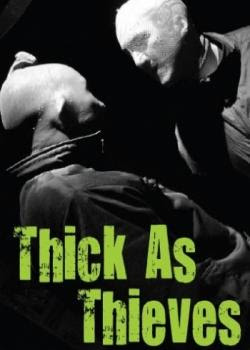 THICK AS THIEVES
Reform Theatre Company at the Cramphorn Theatre
29.10.10
Two inept petty criminals in a deserted house – a lived-in look, comfy, cream crackers behind the settee, junk mail avalanched against the front door. All it needed was the Dumb Waiter.
Mark Whiteley's clever comedy is based on a simple idea, but the crisp writing, and especially the pace and attack of these intimate exchanges, made it constantly watchable. These two likely lads are nicely contrasted – Barry Ireland, the baby-faced ex-con drinks his tea from a cup and saucer, Steph “The Earl” Ashton, his friend and mentor, from a mug. He plays with language, asking questions for “dramatic edge”, and delivering angry tirades when things, inevitably, go belly-up, and the cash in the attic turns out to be a load of old Ratners. His movie charades and his “Let Him Know” monologue were tremendous theatre.
It would be a shame to give away too much of the plot – but the hibernating, hypothermic budgie turns out to be the least of their worries, and they never get to use the QVC card or eat the Asda fare.
The play had an interesting genesis, playing in real front rooms, shops, and on the Edinburgh fringe. It started life as a 35 minute short: longer is not necessarily better, and even this excellent set was no substitute for the thrill of the site-specific.
For this tour, directed by Keith Hukin, Barry was Matthew Booth, and Steph Kivan Dene.
on Friday, October 29, 2010