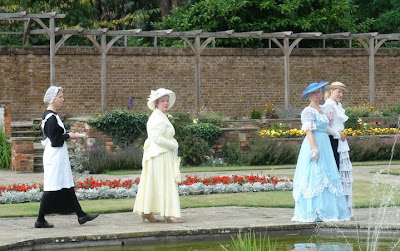 THE IMPORTANCE OF BEING EARNEST
Lindisfarne at the Dixon Studio,
the Palace Theatre Westcliff
for Remote Goat
23.10.10
Period furniture, several aspidistras, Lane [an unbending Simon Dunn] listening to Algernon's pianoforte practice.
An auspicious start to Lindisfarne's “Importance” in the Dixon Studio. “Style, not sincerity, is the vital thing”, as Oscar says.
The two bachelors, neither named Ernest, coped manfully with Wilde's precious language, and at least were the right age. The “ostentatiously eligible” Algernon was Nathan Spence; his friend Jack was Rory Joscelyne. They interacted well, though a crisper delivery, and better posture, might have improved their characterization.
I was impressed by Lizzie Smith's Cecily – a touch of the jolly hockey sticks and a hint of wickedness made for a memorable performance. She could also manage the accent - “little” the shibboleth here – and got most of what few laughs were going from a staid matinée audience. Her duel with Gwendoline [Kim Tobin] was very amusing; the weapons sugar tongs, cake slice and engagement rings. The overbearing Lady Bracknell, heralded by a very Wagnerian ring at the door, was Elaine Roberts. She looked and sounded like one raised in “the purple of commerce” - in Act Two she was done up like a Lemon Fancy – but she bristled effectively; I liked the way her hat's feathers trembled with indignation, her pince-nez and her use of the sal volatile before “the line is immaterial”.
Carol Hayes was a pert, almost pretty, Prism, but she was a convincing academic, thrilled by German grammar, and had some nice moments with Ian Morton's eager Chasuble.
The Gilbertian dénouement was briskly handled, and the couples joined in a decorous dance to round off the piece.
production promo video from the Lindisfarne Players

Email ThisBlogThis!Share to TwitterShare to FacebookShare to Pinterest
Labels: lindisfarne, palace theatre westcliff, remote goat, the importance of being earnest