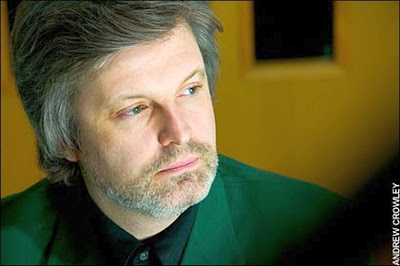 BRITTEN SINFONIA
M&G Concert at the Civic Theatre
24.10.10
A wonderful, high-profile start to the new M&G Civic Concert series. James McMillan's Oboe Concerto, premièred on this Britten Sinfonia tour, and co-commissioned by them, is dedicated to the soloist, Nicholas Daniel.
It certainly gave him a challenge, both technical and artistic. The jaunty opening, with the oboe dancing wildly, was followed by a sombre Largo, the superb string section sighing under the oboe's musings, and an intense, often ecstatic Allegro finale. Both the soloist and the orchestra played brilliantly, under McMillan's own direction, expressive but never ostentatious.
The shock of the new was followed after an interval by Mozart's familiar 40th, in a muscular but meaningful performance. An extrovert Minuet and Trio followed by a nimble closing movement, with something of the same magic between woodwind and strings we'd heard in the McMillan.
The concert opened with the Barshai reworking of Shostakovich's Eighth String Quartet; full of incident and self-reference, and featuring a ghostly waltz and an eloquent duet between Caroline Dearnley's cello and the violin of leader Thomas Gould.
on Wednesday, October 27, 2010