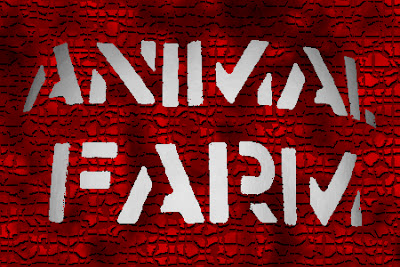 ANIMAL FARM
Artisans Drama Society at Brentwood Theatre
20.10.10
Orwell's cautionary tale still seems painfully accurate sixty years on – even the fall of communism seems foreshadowed in this story of an idealistic workers' cooperative.
To Ian Wooldridge's adaptation, Graham Poulteney has added some more of Orwell's own words, delivered with some style by Vernon Keeble-Watson, especially when he wanders on hesitantly sketching the opening of the novella in his notebook. After that he was reading from a lectern, and sometimes amplified, both of which distanced us from the narrative. The animals too were strangely static; I would have expected at least some of them to be moved by events. The freezes, with slides of real revolution behind, were effective, and more of that kind of staging would have made for a more exciting evening. And adding undiluted Orwell shows up the less Orwellian amendments. The final sole commandment ends “... some animals are more equal than others.”, the informal abbreviation “vet” sits awkwardly with “horse-slaughterer”, Pilkington would never have said “the invite”, and there was disconcerting dissent over the pronunciation of “comrade” ...
There was some good animal characterization – Richard Spong as the raven and the dove, Nicola Stacey as an Eeyore-ish donkey.
And I liked the farewell to Boxer [Andrew Spong], nuzzled by his equine comrades.
The pigs have the meatiest roles, of course, always strutting above the lower animals. Neil Gray was a pompous Napoleon with a nice line in oratory, and Matt Jones a smooth-talking Squealer.
Shostakovich's music, the chalked commandments and Alice Stacey's artwork added to the atmosphere of this familiar fable.
on Sunday, October 24, 2010