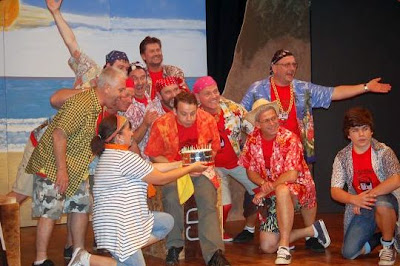 THE PIRATES OF PENZANCE
Billericay Operatic Society at Brentwood Theatre
06.10.10
It's Frederick's birthday – for his party he's chosen a Pirate theme, complete with “alarming costume”. With this master-stroke, director, choreographer and birthday boy Wayne Carpenter brings Gilbert and Sullivan into the 21st century.
Though not of course to 2010. Adrian Rilstone has an interestingly pedantic note in the programme, so I don't mind pointing out that the nearest we can manage for this particular birthday is 2009, with Frederick finally free from his indentures in 2072.
The ladies who surprise the lads on Penzance beach are fitness fanatics, dressed for the gym, and kept on their toes by Major-General Stanley [retd.] their personal trainer.
The whole show was done with style and relish; chorus movement used the tiny space ingeniously, and there were continual clever touches – the armorial weapons, the stashes of CDs, the truncheons and swords for the bridal arch, the patter songs encore. I think Gilbert would have been tickled.
Billericay did have the advantage of having some very seasoned performers to bring this novel interpretation to life: Brian Plumb's urbane Pirate King, Mark Clements' cynical Sergeant, Fiona Whittaker's impressive coloratura as Mabel, and John Larking as Stanley.
The Carpenters were very much to the fore: Wayne was an engaging Slave of Duty, Gail a wonderful Ruth, excellently sung and acted, and Matthew made a fine right-hand-man.
I wasn't convinced at first that this space and these forces needed sound re-inforcement, but it did work, and John Pitts's clever reduction was impressively served by Derrick Thompson's musicians in the wings.
on Saturday, October 09, 2010