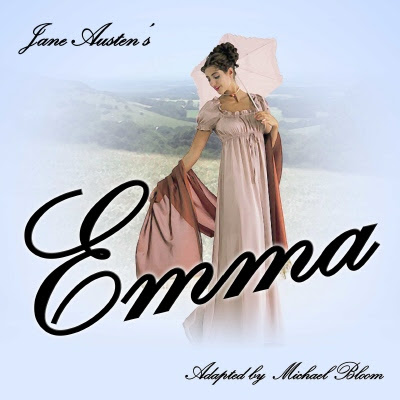 EMMA
Theatre at Baddow in the Parish Hall Great Baddow
09.10.10
A UK première for Theatre at Baddow – Michael Bloom's lively Emma, Jane Austen's comedy of manners shrunk to two hours and countless fleeting scenes.
Against an uncluttered backdrop, boots and bonnets came and went, in a production which successfully suggested the “fine manners and breeding” of the novel.
The casting was carefully done, with some excellent character work and no weak links. Vicky Wright was a slightly smug Ms Woodhouse, a compulsive, mischievous match-maker, with her schemes and stratagems. Her Knightley was the dependable Roger Saddington – both spoke their lines with wit and understanding. Brilliant supporting performances from John Kensett as Emma's lugubrious father, and John Mabey as Elton, hilarious when wooing and when wedlock had subdued him.
Philippa Spurr's Harriet touchingly declared her love for Knightley, Jo Peplow-Revell made an engagingly reserved Jane, Sheila Talbot a garrulous Miss Bates, Nicholas Milenkovic a dashing Frank Churchill, and Caroline Wright was well worth waiting for as an insufferably flighty Augusta.
The production, directed by Matthew Jones and Joanna Windley-Poole, moved effectively down onto the auditorium floor from time to time, though this did make demands on a limited lighting rig. Costumes and hair were striking. The sedate dances were delightful. My only reservation was that the scene changes, done in darkness to not very authentic music, made for a stop-start staging. There were three costumed domestics. Could they not, with the cast, have adjusted furniture and fittings in full view ?
on Sunday, October 10, 2010

Email ThisBlogThis!Share to TwitterShare to FacebookShare to Pinterest
Labels: emma, theatre at baddow