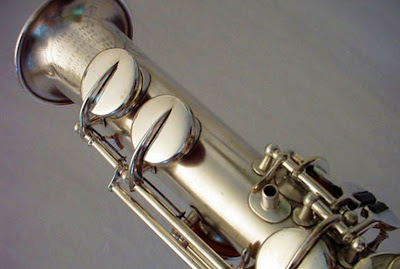 Cramphorn Theatre
15.09.10
Wednesday lunchtimes at the Cramphorn have resumed for the autumn season, and recently we've seen Robert Brunsdon, all the way from Ipswich, on tenor and soprano sax, and Roger Montgomery on guitar.
His easy-on-the-ear set included a deep mellow sound for Witchcraft, and a classy take on Someday My Prince Will Come, with a woody tone from his vintage soprano instrument, which also featured in Bechet's evocative Petite Fleur.
A snappy Perdido, a smoky, sleepy Chelsea Bridge, and to finish, Charlie Parker's bebop classic Now's The Time.
Sympathetic, occasionally subversive piano from resident host Jeffery Wilson, who also supplied the links and the anecdotes.
Roger's programme was all-American, largely from south of the border, and mostly mid twentieth century. So we heard Jobim from Brazil, plus the lovely Carrilhoes by Rio street musician Pernambuco – its catchy simplicity captured to perfection the time and the place. Roger ended with virtuousic effects from the Wild West, and before that his own arrangement of Strayhorn's Lush Life, making it sound as if it were intended for the guitar all along ...
Coming up next week [13 October] D'Ukes, the splendidly named Ukulele band. As ever, 1pm in the Cramphorn Theatre.
Also back in business, the Chelmsford Cathedral Friday lunchtime concerts, every week at 12.30, with Crosswinds Brass, Darkwood Clarinets, Gaudeamus and the Forest School Big Band all to come before Christmas.