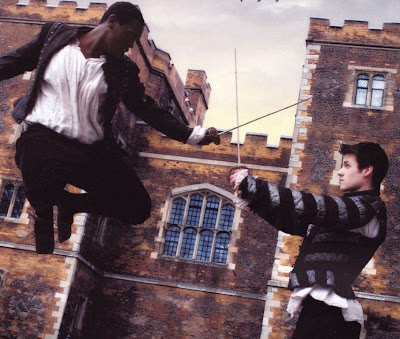 PRINCE OF DENMARK
National Theatre in the Cottesloe
15.10.10

“Who knows what stories lie in store?”, someone muses. Horatio, possibly. Well, most of the audience, I'd guess, since this specially commissioned work is a prequel to Shakespeare's Hamlet, with all your favourite characters in the first flush of youth. Recognisably, if improbably, teenagers.
“a terrific first introduction to Shakespeare’s anti-hero” the blurb promises – the idea being to give today's teens a way in to the tragedy – but the more you know of Osric, say, the more you'll appreciate this clumsy wooer [amusingly done by Abubakar Salim, with an elegantly cool Eve Ponsonby as his Ophelia].
Michael Lesslie's piece is largely traditional, with Tudor-ish costumes [though these youngsters are Converse-shod] and a disconcerting mixture of Shakespeare-speak and a dull modern idiom. There's a willow and a brook, and troupe of travelling players, with a player Prince [Kaffe Keating-Jungreithmayer] the very spit of young Hamlet [Calum Finlay]…
The real Prince has a great speech about the state of England, but the best of the back stories has to be the radical leftie Laertes, scheming to rid the world of privilege and tyranny. A brilliantly intense performance from a very credible Chris Levens. Two fights [Alison de Burgh], the stylish classical battle more successful than the rather careful court swordplay. These impressive young actors, all from the National Youth Theatre, were directed by Anthony Banks.
I found little subtlety in this sixty minutes' traffic of the transverse stage - “The rest is always violence,” as modern warfare thunders around us on the soundtrack – but a clever extrapolation of some very familiar characters.
Photo (Abubakar Salim and Calum Finlay) © Ludo des Cognets
on Friday, October 15, 2010