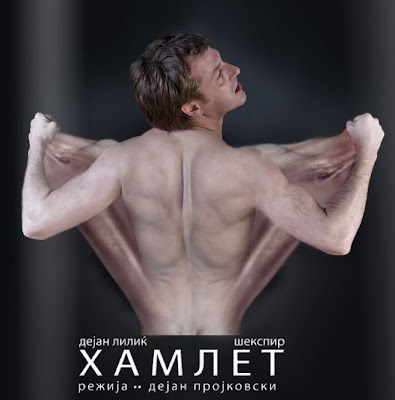 HAMLET
NI Drama Theatre Skopje at the Mercury Theatre Colchester
for The Public Reviews
29.09.10
Colchester's Stockholm – reviewed here last week – goes to Skopje, and Hamlet comes to the Mercury, with the Macedonian actors billeted in the Red Lion and Elsinore arriving in a lorry just two days before curtain up.
Deyan Proykovski's boldly imaginative production has hardly a dull moment. He describes it in his programme note as The Scream of the theatre, and certainly expressionism is a heavy influence. The staging is packed with ideas, memorable moments and striking images. The books - “Words, words, words” - or the sword in the stone. Not always, it has to be said, in harmony with Shakespeare's words, flashed up on a screen above the stage. Ophelia, for instance, thrashes around wildly in a perspex bathtub – no willow, no brook, and certainly not “incapable of her own distress”. And the guards who open the action are crouched, naked, under “the platform where we watched”, in darkness and smoke. Is this hell ? Is this a cell ? The latter, perhaps, since later characters communicate by tapping on walls.
The platform, which becomes a Politburo with black-clad figures in dark glasses, is well used, with banks of candles at one point, and a thrilling moment when Hamlet aims his revolver from below - “now might I do it pat ...”. As is the upper level, a kind of lightbox, first seen as evidence of the incestuous sheets, and later for the Mousetrap. In one memorable effect, one of the huge windows swings open and Hamlet steps thrillingly into thin air.
Deyan Lilich is a riveting Prince, revelling in his madness and holding the stage impressively, especially as his words are alien to us. Violating Ophelia [a feisty Viktoriya Stepanovska], emailing home from the ship to England, forcing Rosencrantz and Guildenstern to eat sand - “If you love me, hold not off” - but with effective stillness for To be or not to be, and a moving end to the first half, with the Advice to the Players done almost like a Messiah, gentle, loving, with the whole cast gathering round behind him and looking out expectantly towards the auditorium.
Katerina Kocesvska is always an expressive presence as Gertrude, and I liked Dragan Spasov's Polonius, fussing with his pocket comb.
Even for those less familiar with the play, the action is not hard to follow; what is difficult is to see just which gesture, which movement, which facial expression underlines which phrase. 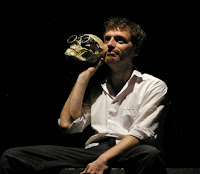 The style is heavier, and bolder, than we would expect from the British theatre. Goran Trayovski's music, for example, is filmic and emotionally charged. And the whole thing seems rather old-fashioned, with its monochrome costumes, its industrial staging and its insistence on the “carnal, bloody, and unnatural acts” - Claudius [a sinister Branko Gjorcev] pleasuring his Queen as he instructs the envoys. The Ghost – tenderly done by Laze Manaskovski, buttering bread with his dagger – emerges from a pit with red light and smoke galore, very literal “sulphurous and tormenting flames”, harking back to a tradition much older than Shakespeare, even.
But a fascinating glimpse of a Balkan vision of the Bard. We look forward to more foreign tongues on Essex stages.

Email ThisBlogThis!Share to TwitterShare to FacebookShare to Pinterest
Labels: colchester mercury, Skopje, the man who was hamlet, The Public Reviews