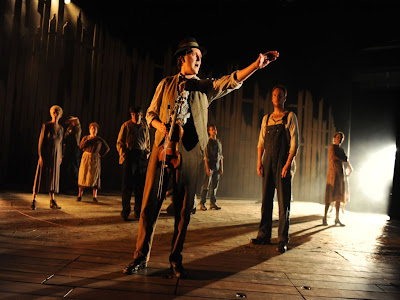 THE GRAPES OF WRATH
Mercury Theatre Company at the Mercury Theatre Colchester
18.10.10
for The Public Reviews
It's twenty years now since Galati's dramatisation of this Steinbeck classic hit the National Theatre's stage. Like the novel, it remains as strong as ever, and as relevant, with the little people powerless against the elements and financial institutions.
Tony Casement's epic production [three hours including the interval] is set on a boarded floor, with a revolve, with broken boards upright behind to form an arena. Dust drifts in, 'hung like fog', together with three musicians, whose contribution as actors, narrators, underscorers, and still, silent witnesses will be vital to the play.
Tim Treslove's fallen preacher is discovered on. His noble sinner, one of many religious echoes in the piece, was a memorable creation, human, yet a hero. His meeting with Tom [Gary Shelford] begins the narrative; he confesses and hears confession, and twice offers himself as a sacrifice. Shelford, too, was outstanding as the son who returns from jail to find his home abandoned, and who eventually leads his folks to a new life in California. His determination, and his deep-seated violence, were eloquently expressed in a corner-stone performance. The other central figure, who, like Tom, never loses a naïve optimism and the will to go on, was Ma, Nicky Goldie. Two moments will stay with me from her wonderful embodiment of this warm-hearted matriarch: her dumbfounded shock when she sees her son return, and her desperate strength after Grandma's death on the journey.
Among a large cast there were several familiar Company faces, and countless telling characterizations. Roger-Delves-Broughton's weary Pa, Adrian Stokes' Grandpa - “ a heller yet” - Keith Dunphy's simple-minded Noah, who cannot bring himself to leave the river, Emily Woodward's Rose of Sharon, and Ignatius Anthony as Uncle John, obsessed by sin and guilt. Christopher Staines left his place in the band to give a performance of distilled despair and bitterness as the Man Going Back.
As in last year's site-specific Depot, there was also a horde of Community Actors, who filled the stage at key dramatic moments. Like the thrilling off-stage chorus as they marched on for the first time, the teeming masses caught up in the catastrophe.
The staging was simple, but the groupings were always effective. Maybe the truck [ingeniously constructed from the Joads' furniture] travelled a little too long on the revolve, but we also had a grave, and two water scenes, the second an apocalyptic flood. The barn dance, in the relative comfort of Weedpatch, was moving, too.
Like Steinbeck's “march and symphony” novel, the play ends with a mythic, heart-stopping scene in the barn. Music, lighting, the Old Master stage picture, and of course the performances, all came together to marvellous effect, and sent us out shattered into the clear air of Colchester.