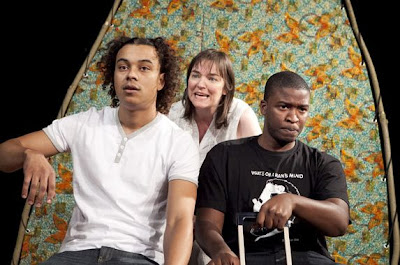 PALM WINE AND STOUT
Eastern Angles at the Cramphorn Theatre
08.10.10
For Black History Month, Eastern Angles are touring a commission from Segun Lee-French: Palm Wine and Stout.
It's the almost-true story of Taiye, who's drawn back from Manchester to Africa by the spirit of his long-dead twin. There he eventually meets the father he's never known, and struggles to understand the Nigerian culture he longs to embrace. His western way is to talk things through, clear the air, while his black “brother” just wants to get on with life.
Directed by Ivan Cutting and Kate Chapman, this had many of the hallmarks of Eastern Angles' work – evocative music, a small, hard-working cast, a powerful immediacy and deft, ingenious touches. I liked the radio voice, the bizarre spirits who welcomed us in, and returned as a sort of chorus. At the end, the banknotes rain down, there's drumming and dancing, and a real sense that we've shared a private, personal journey.
Taiye, who narrated much of the story, was played by a charming Joe Joseph, his father, and the brother, by Zackary Momoh. Helen Grady was excellent as his nervous, embarrassing Mancunian mum, who joins him on his quest, and Antoinette Marie Tagoe gave inspired performances as the many female family and friends they meet along the way.
photograph - Mike Kwasniak
I also reviewed this show for The Public Reviews
on Monday, October 11, 2010