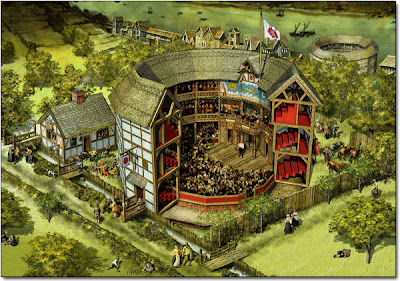 THE TEMPEST
on the site of The Rose Theatre, Bankside
10.10.10
for Remote Goat
I remember standing by Southwark Bridge in 1989, watching the great and the good demonstrating amongst the archaeology, protesting against the burial of the Rose beneath an office block.
Well, they succeeded to an extent. The excavation is visible, under water and membrane, beneath the faceless monolith. And increasingly is used for performance work of all kinds.
The Tempest was a worthy, traditional staging of Shakespeare's late masterpiece. The Rose, which certainly saw some of his earlier work, was rubble by the time he penned The Tempest, but it was moving nonetheless to hear his words echo round the space he would have known. And the diction was almost universally excellent – not always a given, these days, even on our greatest stages.
The Rose's makeshift performance area is broad but very shallow – a metre or two at most. At its back, an ugly modern rail separates actors, and audience, from the archaeology. But David Pearce's production uses the width effectively – the storm, a projected tornado, and the shipwreck echo from side to side, and 90 minutes later, the “rabble” are swept unceremoniously off stage right.

As the tempest abates, we are left with flotsam under foot – shoes, roses, and, bizarrely, plastic bottles. And in the rafters overhead, a still life with books and a skull ...
Robert Carretta makes an intense Prospero, appearing first as a silent cowled figure. He serves the verse very well, with a sensitive, direct delivery. No more so than in his last speech, which he laboriously writes in his book to his own dictation.
His Ariel, Damian Cooper, is an untutored boy, not especially “delicate”, but affecting in his longing to be free. I liked Suzanne Marie's melancholy Miranda, naively besotted with Thomas Thoroe's Ferdinand. And Damian Dudkiewicz was a splendidly physical Caliban, crouched like Gollum, enslaved and tormented on his own island.
Gareth Pilkington and Richard Ward worked hard doubling Alonso and Gonzalo with Trinculo and Stephano. Hard to get the laughs in this tiny auditorium, but they made an amusing pair of flat-capped cabbies, teasing Caliban with a mop and a rose.
Sound and music were well used, with Eleanor Cope and Emilia Reid the island's sirens, and Iris and Ceres in the Masque.
Now that the revels are ended over the road at the Globe, it's good to see that the smaller, older Rose is keeping live theatre going into the winter on Bankside. 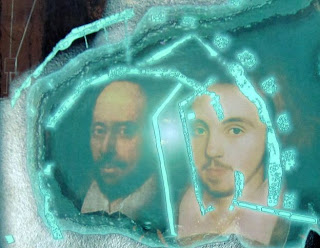