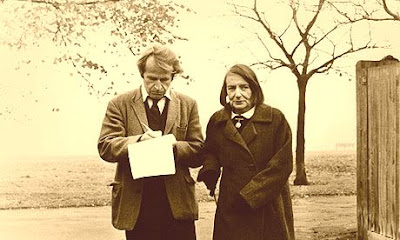 STEVIE
Heads First Theatre Company at Brentwood Theatre
17.10.10
In the drab clutter of the suburban 1950s, Ercol chairs, bakelite wireless, Stevie Smith lives out her weary life.
Hugh Whitemore's 1977 play is a clever blend of biography, autobiography and of course poetry. Most of the words are Stevie's own. The first act is heavy with narrative and reminiscence, but after the interval the drama moves up a gear. The Lion Aunt is frailer, ailing, and Stevie herself more and more fixated on death.
Marjorie Dunn's production flowed smoothly, following the poet's magpie mind and the daily trivia of tax bills, teacups, junket and York ham.
She had an A-list cast to work with. Glenda Abbott gave a masterclass performance as the Palmers Green poet. She relished the set pieces – her visit to the Palace, the bulrushes, the Tintoretto – but also excelled in her exchanges with her aunt, and with her suburban suitor Freddie. He was played by Alan Thorley, who was also an interviewer and a kind of narrator; his was the voice of Not Waving But Drowning.
Margaret Corry was the Lion Aunt. Never really at home with the Hull accent, she was at her best in the later scenes, feebler and fonder, absent-minded and anxious, sleeping her life away in her favourite armchair.
It says much for this production that the unlikely, complex relationship at the heart of the piece was both moving and amusing, and by the end we felt we had shared the private life of this most secluded of poets and her unhappy muse.
on Tuesday, October 19, 2010