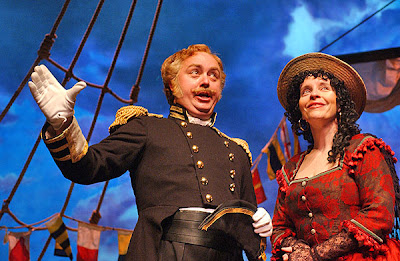 HMS PINAFORE
Opera della Luna at the Civic Theatre
03.10.10
Opera della Luna's flagship success sailed back into the Civic last Sunday, to the cheers and whistles of the happy throng on shore.
A relatively traditional production of the G&S classic, it starts with an all-hands-on-deck overture, with drum, pipe, sheets, sails setting the nautical scene. The Lass Who Loved A Sailor was sung by Rhona McKail with a rich vocal tone; her Ralph, a common tar, by Trevor Jary. But its the character roles that hog the limelight here: Ian Belsey's pompous Captain, Louise Crane's perfect Buttercup, Carrie Ellis's subtly comedic Hebe, and Philip Cox's diminutive First Lord – every word crisp, every movement meaningful, hilarious in his barely suppressed desire to show Ralph the finer points of the hornpipe. And double delight from Graham Hoadly, as the grotesque Dick and Sir Joseph's singular Aunt, possibly from Brazil.
Some clever touches from director Jeff Clarke: the 6d sheet music for Oh Joy, Oh Rapture, and the opening of the second act, with a solo fiddle [Rachel Davies], Corcoran's pungent Navy Mixture, and his Fair Moon, a perfect parlour ballad.
The art of the encore was exhibited in Never Mind the Why and Wherefore, with Maestro Clarke spurring his forces on to ever more frenzied tempi.
on Saturday, October 02, 2010