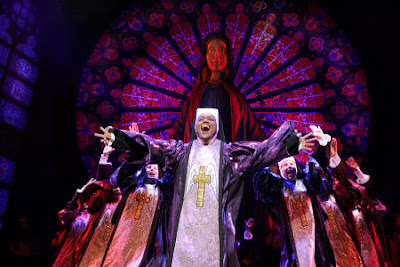 SISTER ACT
London Palladium
13.10.10
“Can't keep the Pope waiting – let's get this show on the road.”
We happily guy the faith, mock the Pontiff. I'm not sure if this is a sign of decadence or of maturity. Whichever, Sister Act is a shining example.
Set in the gaudy, tasteless Seventies, it tells the story of a lounge singer who seeks sanctuary in a nunnery, and, in a miraculous make-over, transforms their tired choir into a guaranteed pew-filler.
Alan Menken's music is a clever pastiche of the period, and the staging, from the chiaroscuro church to the technicolor restoration job and the stylish black-and-white geometry of the the chase through the cells, was ingenuous and involving.
Crowd-pleasing performances – nothing too subtle here – from Patina Miller as the chanteuse turned novice. Ian Lavender as Monsignor Howard, and Katie Rowley Jones and Claire Greenway as character Sisters. I liked Ako Mitchell's Sweaty Eddie; shame his transformation number was so ordinary, unlike the gloriously sleazy seduction trio for the henchmen. The Nuns' Chorus brought warmth and vitality to the big breezy production numbers.
Self-regarding macho misogynist Shank was done with relish by Chris Jarman, who had one of the better accents of a mixed bunch.
MD, and fleetingly the Holy Father, was Nicholas Skilbeck.
on Thursday, October 14, 2010