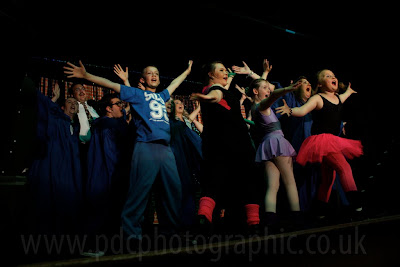 Even in the early 80s, no-one really believed that Fame would make you immortal, but there's an endearing optimism about the kids who're “going to live forever” in the film and its franchise, which includes tv, reality shows and this musical.
Choosing Fame for your first venture onto the musical stage shows a deal of optimism too, not to mention chutzpah and lack of fear.
I thought the most impressive thing about Trevor Hammond's ambitious production was the brilliant ten-piece band, led by MD James Tovey. So much so that the kids often struggled to compete, not helped by unsophisticated sound re-inforcement.
The lighting, too, was downright bizarre, almost all from below and the back of the hall.
Some performances shone through, though, including the street-dance boy in the chorus [Samuel Gower?], Louise Haines' Mabel, with her Gospel Weight Loss number, Andy Prideaux's violin prodigy, and Jamie Haines' insufferable Tyrone, “Dancing on the Sidewalk” his finest hour.
Molly Blackmore handled her numbers well, as did Katherine McKeon, striking as the tragic Carmen. Edward Barber, not ideally cast as extrovert Hispanic Joe Vegas, made the most of his opportunities, and I sympathised with irascible music teacher Ben Allen.
Because this very bizarre show – a great success in the West End, I know - is ultimately very depressing, imagining as it does a High School for Performing Arts where the “cream of the crop” have bags of attitude but almost no discipline, where “hating Shakespeare” is no bar to being in the Acting Class, a Sonata can only be improved by adding clichéd lyrics, being gifted in street dance means you have nothing more to learn, and dyslexia can go undiagnosed for years.
I hope it won't be the last musical at Danbury – the enthusiasm and energy on show here deserves to go from strength to strength. But, if you choose another made in the USA, you've got to go for the accents. You've got to stop people wandering aimlessly during their solos. And you've got to say No to people, however keen, who can't hold a tune at all.

A very kind review which I agree with in part especially regarding the enthusiasm of certain cast members, the girl playing Mabel really lifted everyting when she came on.
My big gripe was the frequent bad language and adult subject matter which was totally inappropriate for the maturity and age of the cast (most of whom looked well under 16!)