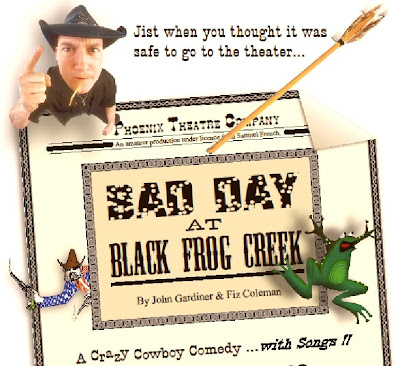 BAD DAY AT BLACK FROG CREEK
Phoenix Theatre Company at Christ Church, Chelmsford
11.06.11
Guest director Kenton Church – no stranger to Black Frog Creek and its comedy characters – had an impressive saloon set, with a cleverly-used window by the swing doors, and he had managed to get some credible performances from his cast.
The script glories in bad puns, word play and jokes that were old before the West was won. The key thing with this material – think Round The Horne – is never to be the slightest bit diffident or apologetic. Complicity with the audience is essential. “I'd rather be watching TV, given half a chance,” and I quote.
Outstanding in this respect were Jean Speller's sassy Diamond Tooth Lil, and Joan Lanario's likeable Ma Treacle - “Keep yer eye on me pie!”. Peter White looked good as Filthy Frank, and Les Leeds had a mean Lee Marvin sneer as Tex. Angela Gee gave her all and had a ball with Hairy Hannah, one of the comedy trio of villains.
Richard Langley was engaging as young Yipee Brown, though his performance could have been bigger and bolder, and Neil Smith made a suave Sheriff.
Lots of fun ideas – the varmints nicked with a line of knickers – though sometimes the pace needed to be sharper to get away with the material – the concussed sheriff, for instance.
But a refreshing change for this long-established group, which tends to go for 'comedy thrillers', 'hokum' and 'pot-boilers'. Perhaps next they might try a good modern play …
on Sunday, June 12, 2011