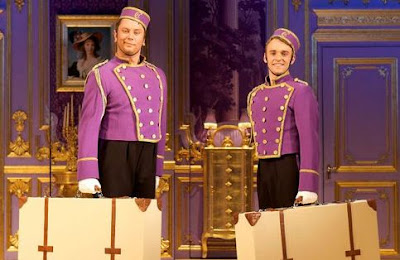 LEND ME A TENOR
Gielgud Theatre
Wednesday matinee : 22nd June 2011
John Richardson, lucky man, had a seat in the stalls ...
A bijou musical that is fun, funny and fast moving, “Lend Me A Tenor” is set in 1934 and tells of the trials and tribulations of the Cleveland Opera Company just hours before a performance of Verdi’s “Otello”. It has witty, fun lyrics, equally witty orchestrations and is a delight on the eye and ear. Sumptuous settings, scenery that magically, seamlessly and inventively moves from one location to another, doors that SLAM without the slightest wobble. And I am reminded of a northern friend whose opinion of a show invariably depended on the number of “wunnnnnderful frocks” – here he would not have been disappointed, for they were exquisite. If you enjoy musicals, good singing and don’t mind an opera or two being sent up, with the occasional tap routine (FAB !) as a bonus, then this is the show for you !
As ever I was too mean to buy a programme so I had no real idea who played who, but, as H.E.Bates' Pop Larkin character would put it, everyone was ‘perfick’. My out and out highlight was the opera company diva’s ‘audition’ in front of the world-famous tenor who should have been singing the lead role in “Otello”. When she began the show I thought she had a ‘modern-day musical’ voice, but was I wrong – she hit each an every note of her pastiche of operatic roles – wonderful ! Her post-number applause took some time to die down, peppered with a more than a few ‘bravo’ shouts (including from me – noisy so and so !). My ‘subsequently done’ homework reveals that she was played by Sophie-Louise Dann. ‘Others’ in the cast (sounds a bit disparaging but it’s not meant that way) included Matthew Kelly and Joanna Riding.
on Sunday, June 26, 2011

Email ThisBlogThis!Share to TwitterShare to FacebookShare to Pinterest
Labels: gielgud, lend me a tenor