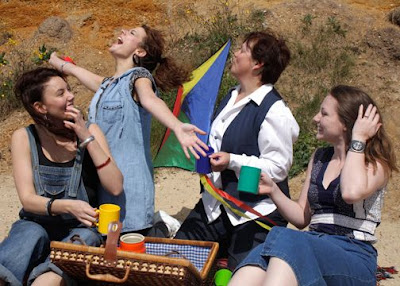 WHALE MUSIC
Witham Dramatic Club at the Public Hall
16.06.11
Max, the baby “put up for adoption” in Anthony Minghella's early success, would be 30 by now.
Witham's welcome revival, directed by Graeme Parrett, evoked the 80s in its furnishings and its clever choice of music – Girls Just Want To Have Fun, I Could Be Happy.
The performances, on the other hand, seemed very modern, naturalistic, even hard to hear at times.
Catherine Hitchins was Caroline, who escapes to a lazy seaside town to have her illegitimate child. Scarcely out of adolescence herself, she struggles to maintain her resolve and master her emotions; we share her ambivalence and her anguish – a touching performance in this challenging central role.
But it was Gemma Robinson's Stella who touched an emotional nerve, with her bitter, artistic landlady who has a pathological loathing of men. Her raw, honest monologue was masterly.
Charlette Kilby was the baby-obsessed schoolfriend Fran – a nice, if uneasy, contrast with the troubled Caroline.
The most successful scenes were the set-pieces: a game of charades, kites on the beach. They felt very fresh, very real, improvised even. The trio were joined by Caroline's lesbian ex-teacher and her 17-year-old pupil/lover D [a very promising Natalie Whitworth]. The moment when Kate [Jacqui Brown] is forced to accept rejection, and some awkward truths, was movingly done.
There was strong support from hospital staff [Anne Dyster and Viv Carey], Shirley Taylor as Caroline's uncomprehending mother, Roxanne Carney as Veronica, and Alex Twitchett, making a promising début as a surly waitress.
The piece seems very much of its time, with a strong sense of sisterhood and no sign of the New Man. But it was good to see it on stage, stylishly presented on the flat with striking portraits on the walls, and the empty stage effectively reserved for the beach and the bicycles.
on Monday, June 20, 2011