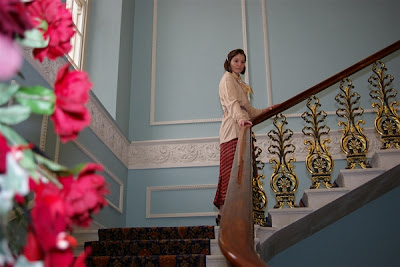 REBECCA
Cameo Players at Hylands House
05.06.11
The Cameo Players brought their Rebecca – already a success at Little Baddow – to Hylands House last week, in a polished production by Lindsay Lloyd.
Using only a minimal set – not, alas, the imposing staircase in situ - and no stage lighting, this implausible melodrama made a tremendous impact on capacity audiences.
Four great characters come together in the story. Maxim de Winter, the master of Manderley, bringing back his new bride, hoping to forget the past. Darren Matthews was a little young for the role, in truth, but he gave a searingly honest, strong performance, using his voice to suggest the pain behind the suave, stiff exterior. The second Mrs de Winter was played by Sara Thompson; the shy, mousy girl was touchingly suggested, and I liked the way her eyes shone when she hoped to surprise Maxim at the ball, or when she was determined to save him from the hangman's noose. But the foyer talk was all of the sinister Mrs Danvers, given a performance of depth and detail by Vicky Tropman. A still, brooding figure, she dominated the room with a look, a pause, an inflection, and later, as she descended into madness and mania, she obsessively adored the relics of her former mistress, the first Mrs de Winter. And lastly there is the house itself. The technical limitations are outweighed by the sense that these walls have known servants and sorrows, seen masked balls and maybe even murder.
Not all the other characters had much opportunity to shine, and such opportunities as they did have were not always taken. But I did enjoy Catherine Bailey's snobby, bitchy Beatrice, and I admired the uncomfortably intrusive presence of the rotter Jack Favell, stylishly played by Robert Bastian.
Like Thornfield, and Tara, the house is climactically consumed by fire. The moment cried out for special effects, but the impact was preserved by the now deranged Danvers silhouetted against the red glow, and by a glimpse of the shade of Rebecca running towards the West Wing and the oblivion of the flames.
on Tuesday, June 07, 2011