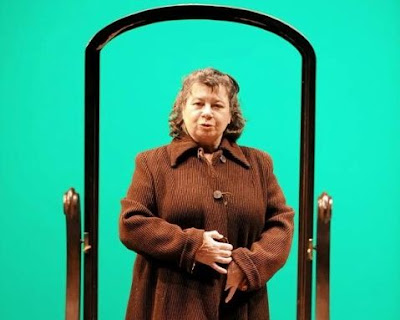 ASSUMPTION
Mercury Theatre Colchester
31.05.10
for The Public Reviews
Simon Turley's moving piece was written for an all-female company touring rural Cornwall in the 90s. It was directed then by Dee Evans. Now the Mercury's Artistic Director, she has returned to the play to direct this revised revival.


It is a marvel that such a perceptive, heartfelt drama could be penned by a playwright who is neither Irish nor a woman. And that he manages to combine deeply textured allegory and myth with such a light touch.


The text often strays from the naturalistic – revelation, Holy Mother of God, the music of the spheres. There is pure poetry – a shiver “stutters up the spine” - and biblical language. There are images and symbols galore: the names, the looking glass most tellingly. And there are moments of sheer joyful invention: the breath of the angel captured in a blue balloon [its sisters floated down on us as we stood up to leave], the randy shopkeeper's new dentures.


The story follows the fate of a fallen woman in rural Ireland. Her mother is in despair; her priest packs her off to the Sisters of Mercy for “repairs, not repose”. But the child in her womb is not the result of sin – not Sean, but an apparition, is the father. Though a higher purpose is never even hinted at here. Unlike Our Lady, though, Gabriella has no Joseph to rely on, and refuses the honour; it is her friend Anna [Nadia Morgan] who bears a child.


Emily Woodward was brilliantly believable as Gabriella, proud, scared, innocent, defiant, – her scenes with her mother [another fine, moving performance from Christine Absalom, with every detail wonderfully expressive] were very strong, especially the harsh ending to Act One, and the sequence where Absalom remembers calming her child's night terrors - “swaying and hoping”. The down-to-earth angel, appearing in several disguises, was played by Amanda Haberland, who made her a very approachable being, even in the Annunciation. Her moment of glory – on clouds descending – was neatly punctured by her “I hoped you'd be impressed!”. The nuns were represented by the naïve Assumpta [Morgan again] who plans a grotto and a shrine for the sainted Gabriella, and a cruelly rigid Reverend Mother – Gillian Cally, who also had a nice character role as Shamie, the disreputable relative who might have taken Gabriella to wife.


Dee Evans' direction did much to underscore the message and the magic of the piece. The opening sequence, with the child and the lament, which both appear again at the end, the confession with its weighty crucifix, the laundry where you could almost smell the washing, and the shrinking wall of light at the back, ingeniously suggesting the door and the distance. Adam McCread's soundtrack, too, though never intrusive, made a huge contribution to the show.


An impressive ensemble piece, beautifully staged, deeply affecting without being preachy or sentimental, leaving us to reflect on the role of religion, the family and our own angelic encounters.
this piece first appeared on The Public Reviews