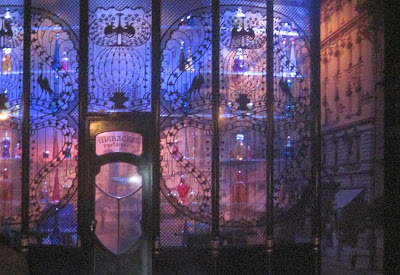 SHE LOVES  ME
The Minerva, Chichester Festival Theatre
01.06.11
“It's a far cry from 'Allo Allo' ...”
Overheard just before the overture of She Loves Me, in the cosy Minerva at Chichester. How true. The jewel-case set, designed by Anthony Ward, has the Parfumerie window on a revolve, with a fin-de-siecle street scene on a cloth behind, a classy tiled floor and the band raised up on either side.
Joe Masteroff's book imagines an epistolatory love affair – it would later inspire You've Got Mail – between two people who just happen to be employed in the same Budapest store. And it's by no means brainless – Mann and Stendhal are both referenced.
In Stephen Mear's enormously enjoyable revival, the frankly so-so musical numbers are treated as if they were Loewe, Cole or Coward, by a cast of superb singer/dancer/actors who really know how musical comedy should be done.
The romantic leads were Dianne Pilkington's Amalia, and Joe McFadden's Georg, but the true delights of this production were the supporting players – twinkly, rotund Jack Chissick as Mr Maraczek, Gavin McCluskey as the delivery boy, Lee Ormsby as the Maitre D of the louche, decadent night club [inexplicably the only character with a British accent] and especially Annette McLaughlin as Ilona, the long-suffering second string who finally finds her optometrist Mr Right in the library.
The stand-out number was the Christmas Shopping sequence, ever more manic as the calendar counted down. I also liked Maraczek's wistful Days Gone By, and the recurring Call Again Madam jingle as the shoppers leave the store.
It's hard to imagine this slight but charming show being better served. Will it transfer to the West End, like last year's chamber musical Love Story ?
on Thursday, June 02, 2011

Email ThisBlogThis!Share to TwitterShare to FacebookShare to Pinterest
Labels: chichester festival theatre, she loves me