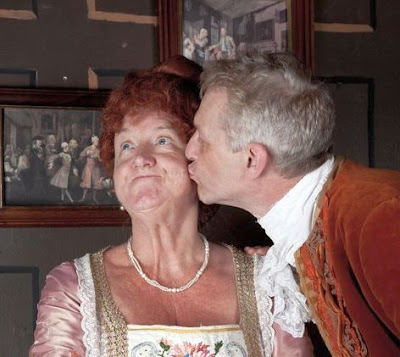 SHE STOOPS TO CONQUER
Chelmsford Theatre Workshop at the Old Court
16.06.11

“Oli G”'s classic comedy, complete with modern prologue, bursts onto the Old Court stage [for all the world like an inn], with authentic live music, gorgeous frocks and wigs, sensitively lit, and a cast of enthusiastic Thespians, including some impressive CTW débuts.
Richard Baylis made a splendid Hardcastle, and Marcus Churchill was excellent as the tongue-tied [and easily eloquent] Marlow. The girls brought a nicely modern feel to their characters, especially perhaps Naomi Phillips' feisty Kate. Phil Drew, last seen living out his loser's love-life along the High Street, was an edgy Lumpkin; Lynne Foster's Ma Hardcastle a masterclass in comedy.
Georgian punch to welcome in the punters, and, at the end, an all-too-brief jig for the cast to take their bows …

Jim Hutchon was at the first night for the Chelmsford Weekly News:

This intricate, complex comedy of manners is constructed like a Swiss watch, and needed Christine Davidson’s meticulous direction, playing to its many laughs, to produce a work of real enjoyment. Marlow, a suitor on his way to woo Kate, a maid he has never met is mischievously directed to his destination thinking he is on his way to an inn. The ensuing Whitehall farce had me in stitches.
Marcus Churchill was very much in character as the swaggering Marlow but could have been a bit more imperious. Naomi Phillips as Kate played a superb role taking every opportunity for laughs while Richard Baylis, as her father, the confused then affronted host played well within himself, though still produced the laughs.
The key male for me was a sparkling performance from the jester half-brother Tony Lumpkin, played with zest and boundless energy by Phillip Drew. This was second only to one of the finest performances I have seen on the Old Court stage, Lynne Foster as the devious, greedy old biddy, Kate’s mum. Another love plot was put together by a fine pairing of Robyn Gower and Kevin Richards as a pair of would-be runaways, and there were delicious cameos from Robin Winder and Mark Preston. The large cast played completely in character and in superb costumes, before an impressive country-house interior.