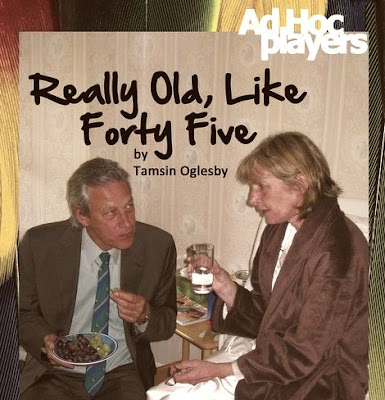 REALLY OLD, LIKE FORTY FIVE
Ad Hoc Players at Brentwood Theatre
08.06.11
In the not-too-distant future, slow-moving oldies clog our pavements, dementia is an epidemic.
Tamsin Oglesby's thought-provoking play, first seen at the National last year, sees two groups grapple with the problem.
A sinister government agency, all euphemisms and double-speak: Paul Ganney very impressive in his political speech, and in his downfall [pure poetic justice], Robert Evans as a number-crunching nerd in red braces, and Hayley Joanne Bacon strong as the sceptical rebel.
And an extended family: stoical Alice [Jenny Lee] and her sister, Lyn, a bright, feisty woman slowly succumbing to Alzheimers, a superb performance by Shealagh Dennis. In contrast, the children – Andrew Spong as Dylan, glued to his PlayStation, and Georgina Hayworth as Millie, the thoughtful [and softly spoken] teenager who values the authentic.
The play is not perfect, especially in the rambling second act, and not all the performances were as spot-on as these. I would mention Kirsty Stoddart's impressive robot nurse, and Vicky Nunn, who on opening night did a brilliant job interpreting the action in BSL.
Wendi Sheard's production was a welcome introduction to an important new play; more confidence with the words would have improved its pace and impact, but it was nonetheless an absorbing and original piece of theatre.
on Friday, June 17, 2011