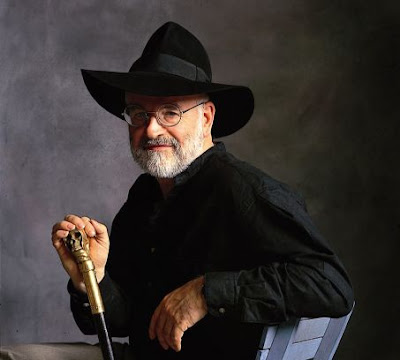 MORT
Brentwood Performing Arts Group
17.06.11
Terry Pratchett has been eye-balling the Grim Reaper recently, though this typical tale of the Discworld dates from happier times in 1987.
BPAG's version [no credit for the adaptation] skated over much of the wit, the wisdom and the word play. They threw everything at the entrance of Death – smoke, strobe, music and a nice echo for the doomladen voice of sinister, cowled Michael Gardener, whose boneless drunk was a physical highlight. His dimwitted, gauche but frightfully keen apprentice was well characterized by Michael Boosey. Chloe Harding was suitably petulant as Princess Kali.
The most successful scene was the careers guidance comedy sketch where Death is advised by Reece Learmouth's clueless consultant.
Elsewhere, the production, directed by group members Kristen Brown and Connor Thompson, suffered from frequent scene changes, slow cues and inaudibly garbled performances.
They're hoping to tackle Rocky Horror next time. Before then, they might explore other groups' work and methods, and acquire the basic skills that any performance demands. Maybe then their audience will look up more often from updating Facebook, and reward their efforts with laughter.
Ironical image of the evening: the Grim Reaper himself standing at a rain-swept Stage Door, desperately drawing on a pre-show cigarette ...
on Sunday, June 19, 2011