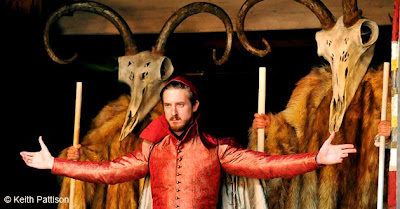 How would the first audiences have seen Faustus, when it opened round the corner from the Globe, at the Rose on Bankside ?
Many of the features that are pleasing the packed house of 2011, I'd guess. The coarse humour, the fantastical spirits and animals straught out of the morality plays. The skeletal dragons were especially impressive. The wings on the Good Angel and later on Lucifer were visually stunning, and Matthew Dunster's production was studded with such treats for the eye: the planets, the lithe deadly sins, the huge puppet Helen of Troy. The opening was striking too, with multiple black-clad, dark-glassed Faustuses, all wielding volumes from his library.
Paul Hilton's Doctor was a conjuror in the modern as well as the ancient sense, releasing an inflatable castle in the air, plucking a bunch of grapes from “a far country”.
What this version lacked for me, was the intensity of emotion and cosmic conflict. This Faustus spoke of Hell as a modern cynic, not a medieval scholar. The verse was not generally well served; Mephistopheles [Arthur Darvill] was too offhand to be evil. Of course we are not likely to be shocked or chilled by one man's rejection of God these days, but the two central characters needed to engage us on a deeper level to do justice to Marlowe's tragical history.
The groundlings loved it, though, and their enthusiasm was rewarded with a generous jig, unnecessarily complex, maybe, but with an inspired instrumental duel between Faustus and
Mephistopheles.