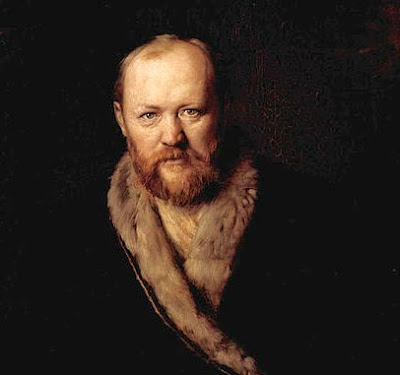 
The Greville Theatre Club at the Barn Theatre Little Easton
03.06.11
“There may be trouble ahead ...” a cheekily anachronistic Tin Pan Alley commentary punctuated Rita Vango's production of this classic Russian farce. Other theatrical touches I admired were the retreat to the gallery of most of the cast, and the monologues to the audience. The beautifully designed programme was great, too.
Nick Dear's adaptation added some ripe language to Ostrovsky's text – think Chekhov done by the cast of East Enders.
The Dickensian characters were mostly well served by the Greville actors; certainly the audience were audibly amused throughout. Were there an award for the most convincing looking Russian, it would have to go to Rodney Foster's Tishka, closely followed by Adam Thompson as Lazar, the timid clerk who reaches the top by wedding the boss's daughter and cashing in on his cunning plan to cheat his creditors.
The shameless Lipochka, who dreams of marrying a military man but is too old for the village idiot, was played for all she was worth by Carol Parradine; her grizzly old bear of a father, a martyr to piles and ulcers, was the excellent Chris Kearney. Good comedic performances too from Marcia Baldry as the Matchmaker, and Steve Braham as the dipso solicitor Sysoy.
“Be content with what you've got” is the message here, since all the swindling schemes come to nothing, and the cast reassembles for the final curtain - “Let's face the music and dance ...”
on Saturday, June 04, 2011