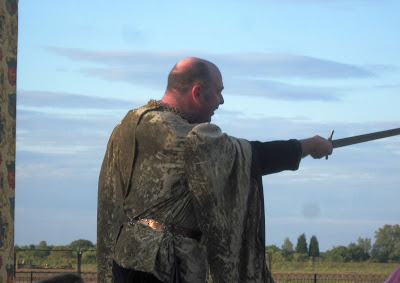 On Midsummer's Eve, the sun is setting behind St Mary's, and between the trees and the Blackwater, Shakespeare's hunch-back Gloucester once more proves a villain.
Barry Jaimeson's determinedly traditional production starred Dave Hawks as the bottled spider. In his first speech, he ran a goodly gamut of emotions, and held the broad stage whenever he appeared, genially confiding in the audience in his soliloquies.
“Is the chair empty ?” in Act IV was exceptionally well delivered, I thought, and his grisly pawing of Hasting's bloodily severed head was another memorable moment. But this was by no means a one-man-show; indeed, there were some very strong women, including Poppy Miller's prescient Margaret.
And sound “Shakespearean” performances, all the way down to the black-clad “erroneous vassals”, who later doubled as priests. There was a good deal of doubling: Michael How was Brackenbury as well as a delightfully vague Bishop of Ely, and John Peregrine, as Rivers, made a noble death in Pomfret, only to bounce back after the interval as the murderous Tyrell. A heroic young Richmond, heavily armoured for Bosworth Field, from Ben Markham, and an impressive Clarence from Kevin Jennings.
The pace was commendably tight; but this is a big space, and the entries around the back wall, strikingly good visually, did sometimes mean tardy overlaps between scenes. I liked the tents on the battlefield, and the voices of the dead in the darkness. The battle itself, though would have benefited from more noise.
As at Shakespeare's Globe, talk of “clouds” and “heaven”, seemed very real, and I appreciated being able to feast on strawberries [probably not from Ely's Hatton Garden beds] and a pint of Tricky Dicky, specially brewed for this show by Farmer's Ales, just up the road at King Richard's own Blue Boar.