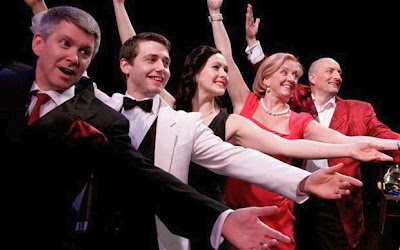 COWARDY CUSTARD
at the Civic Theatre
25.05.11
This glorious pot-pourri of words and music by Sir Noel Coward was first staged while The Master was still with us. Together with its many imitators, it's remained popular ever since.
The present touring version, with just five talented and industrious performers, retains much of the charm and the humour of the original, while adding some effective touches of its own.
One such was the emotive inclusion of the London Bombings, alongside the Blitz, in the London Pride sequence. Sir Noel would have approved the patriotic, propagandist sentiments. And also the restoration of one of his personal favourites, Matelot.
The great strength of this revival was the use of cabaret stars at the top of their game – Dillie Keane, who was priceless in a bilingual Marvellous Party and I Wonder What Happened To Him, and the inimitable Kit and the Widow – Mrs Worthington and Twentieth Century Blues.
The two fresher faces were equally impressive – Stuart Neal dancing in Red Peppers and Room With A View, and Savannah Stevenson superb in the exhausting Coconut Girl audition sequence.
The very simple staging, with its phonograph and its grand piano, was effectively used; the sound reinforcement I found intrusively bright at times, but not enough to detract from a wonderfully potent reminder of this unique “talent to amuse”.