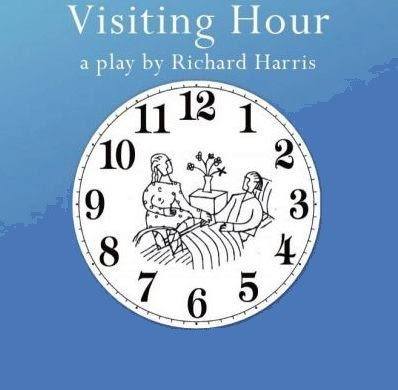 Richard Harris [no, not him, the other one] has a long pedigree of scripts for telly, plus a couple of popular hits for the stage.
Visiting Hour [1990] is a lesser work, a sequence of six scenes set in a hospital ward. From The National Health to Our Boys, it's a potent metaphor for the wider world.
LADS' production boasted a lovely ward in two-tone green; real beds too.
Not well lit, with much of the area in shadow. The transitions were smoothly handled, with curtains drawn round beds, the visiting bell and the beep of cardiac monitors.
The writing, and the acting, were patchy. Two of the pieces are monologues. Carole Hart coped well with Keeping Mum: a little bedside housekeeping, a few home truths and then a darker dénouement as her marriage breaks up and she is chillingly revealed as a serial, compulsive hospital visitor.
The other monologue, which had very little to do with the rest of the scenes, saw Robin Warnes' Mr Archer sharing a lifetime of memories and snatches of song with no-one in particular, his only visitors two ghosts from the past.
Lighter moments elsewhere, with Gill Bridle confronting her paralysed husband with the farcical infidelity that led to his accident. Bill Wright was excellent as the unfailingly cheerful Mr Darbon, bemoaning the dearth of Ronnie Ronalde on his hospital headphones. He's the unwitting star of a transplant documentary, made by his media-whore of a surgeon and a comically camp crew.
Going Home saw Tricia and Cheryl, stewed prunes and apple tart, recovering from hysterectomies while the voice of doom and the busybody pass through the ward. It did boast one of the few laugh-aloud lines of the evening: "Monday she loses her womb; Friday they take all her furniture."
And the slightly surreal last scene – Magic – was enlivened by Keith Spencer's amateur magician and Holly Hallam's Sandra, feeding the payphone with 10p pieces in a vain attempt to rescue a relationship.
By their nature, these scenes are static. Director Arthur Barton moved his actors as much as plausible, and sometimes more, but there were still some dreary longueurs, punctuated sporadically by interesting, touching or amusing moments. Much like life on the ward, I suspect.
on Sunday, March 24, 2013