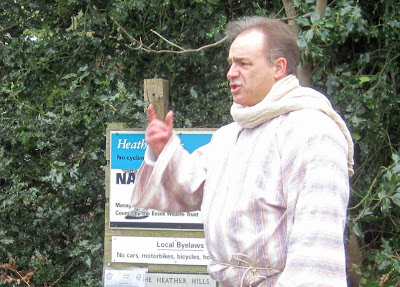 Billed as A Walk of Witness with dramatic interludes, Kenton Church's take on the Good Friday story was inspired by Stephen Cotterell's "The Nail".
Played out in real [Jerusalem] time, it shows some of the key players in the Gospel story looking back over the events of the day, and attempting to justify their actions.
Along the Ridge, down North Hill, from the General's Arms to the Rodney we encountered snow flurries, Roman Soldiers [the Crucifixion], Pilate and his wife [the Trial], Caiphas and Annas [the Veil of the Temple], Peter and Mary [the Denial]. Perhaps the most effective scene saw the lone figure of Judas Iscariot, forcefully telling us his side of the story, before, disillusioned and defeated, he took a length of rope and trudged off along the narrow path to Scrub Wood.
This compelling piece of promenade theatre ended with the acting company – the military, the politicians, the priests and the people, mingling with the sixty-strong crowd in the Rodney Inn, singing together "Were You There When They Crucified Our Lord?".