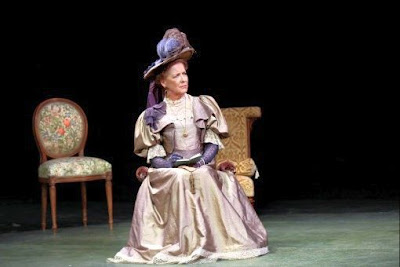 Laura Bennett was in the Civic stalls:

Wilde's time-honoured comedy is brought energetically to life by the consummate London Classic Theatre Company, visiting Chelmsford mid-way through their UK Tour.
Eminently quotable, this production proves that the piece is as vibrant now as ever - more than 100 years since its original release. A solid cast bring a fresh vitality to the familiar characters, with Wilde's witty dialogue delivered with impressive comic timing. The two Ernests (Harry Livingstone as Algernon and Paul Sandys as Jack) bounce off one another with ease, and their intended sweethearts (Helen Keeley as Gwendolen and Felicity Houlbrooke as Cecily) are graceful in their indignation and work especially well together. Carmen Rodriguez is majestic as Lady Bracknell, hilariously under-playing the famous "handbag" scene in a picture of contained distaste. Richard Stamp is almost scene-stealingly funny as the pair of butlers, distinguishing entirely between the two characters and not needing dialogue to generate plenty of farcical humour.
The design of this stylish production is key with the only furniture a carefully fashioned chair per character, encircling the acting space and being strategically pushed forward when required. Costumes are lavishly colourful, and the large roses hanging as the only backdrop add a simple elegance throughout. A charming production of a timeless theatrical classic.